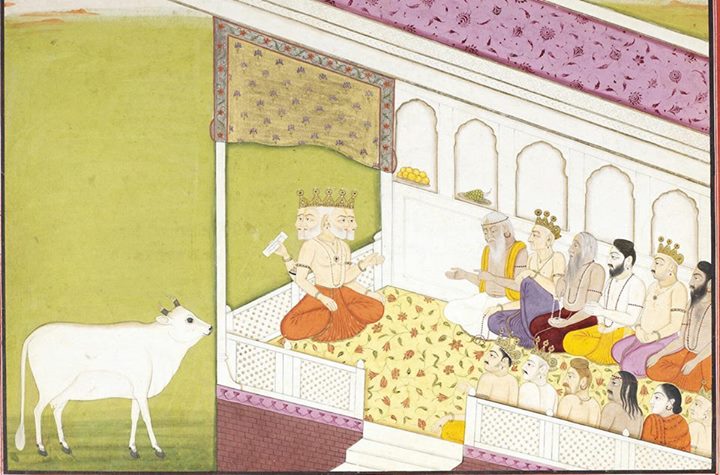 Earth in the form of a cow appeals to Brahma
An illustration to the 'Large' Guler-Basohli Bhagavata Purana
Attributed to Fattu, circa 1760-65

Gouache and gold on paper, red border with narrow black margin and double white rules, cover paper with inscriptions comprising two lines of text from the Bhagavata Purana in nagari and a single line in gurmukhi, in mount

Earth, in the form of a cow, stands besides Brahma, four-headed and four-armed, who holds a scroll in his upper hand with a repetition of Rama written in nagari. Brahma is seated on a floral carpet in a pavilion conversing with kings and brahmins. They have assembled before Brahma to ask for help against the asuras or demons who are wreaking havoc on Earth.

This illustration is from a large series which W. G. Archer referred to as the 'Large' Guler-Basohli Bhagavata Purana or the 'Fifth' Basohli Bhagavata Purana. (W.G. Archer, Indian paintings from the Punjab Hills, London 1973, Vol.I, Basohli 22, pp.49-51; Vol. II, ill. 22(i)-(xiii), pp.36-38). The series was dispersed in London in the 1960s. Fourteen paintings from the series are mentioned in Archer's catalogue which are now among various public and private collections. A large part was sold at Sotheby's (London, 1 February, 1960), formerly in the collection of Mrs F.C. Smith. Our illustration could have come from the same collection.

According to Archer, this series illustrates that the early vigorous Basohli style was now showing influences of a softer, Mughal-influenced painting style from Guler. Specific scenes and details from folios in this Bhagavata Purana have been compared to an earlier Gita Govinda series of 1730 which has been attributed to Manaku. Archer suggests that the sparse compositions, simplified groupings of figures and facial idiom in this Bhagavata Purana series appear to be work of a follower of Manaku. Influences from the work of Nainsukh, the younger brother of Manaku, are also visible. This has led Archer to suggest that perhaps Fattu, the son of Manaku, who had also come under the influence of Nainsukh's work may have been the principal artist of this series.

B.N. Goswamy and E. Fischer support Archer's argument that most of the paintings in the series can be attributed to Fattu (B.N. Goswamy, E. Fischer, M.C. Beach, Masters of Indian Painting 1650-1900, Zurich 2011, pp.687-689, 698). Goswamy suggests that the series may have started during the lifetime of Manaku in Guler (as they believe Manaku to have been purely a Guler artist) and then Fattu gradually came under the influence of his uncle Nainsukh in Basohli. Although Fattu has been suggested as the principal artist for most of the paintings, clearly several different hands were involved in the painting of this extensive series. There appear to be two distinct styles in the series marking a transition in Pahari painting between Manaku's treatment of landscape and his clear composition constructions and Nainsukh's softer style reflective of Mughal influence with naturalistic modelling of figures and attention to detail. (B.N. Goswamy, E. Fischer, Pahari Masters: Court painters of Northern India, Zurich 1992, pg. 314)

This Kangra Kalam painting which we refer as Guler Basholi Painting, in fact we fall short by one place and that is Kashmir where from it originated, spread through Nainsukh , Manaku and Fattu who could be safely called as ambassadors of art from Kashmir when they tried to escape from persecution in Kashmir.Goswami in his book has touched as to how Maharaja Balwant Singh patronised this art.Alas,this art slowly died in Kashmir owing to various reasons.