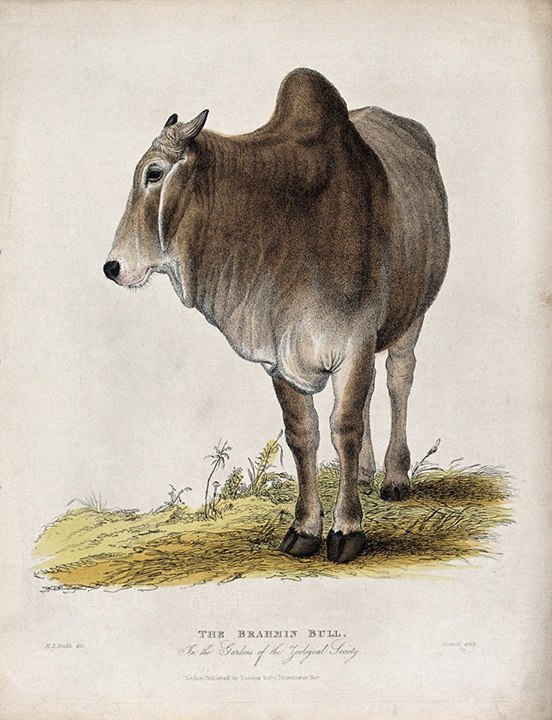 Essay:
The long journey of the Brahmin Bull
By Akanksha Damini Joshi

The story starts in 1854. Southern America, Louisiana.
Once upon a time, 2,500,000 acres of tall wild grass, wild flowers.
Within this expanse, a small plantation town called St. Francisville. In the lap of river Mississippi. Known for its cotton, its sugarcane. And, yes, its cattle ranches.
-
That morning Richard Barrow received a peculiar shipment. They told him it was from India. He was surprised. And when he saw what he saw, he was delighted.
There, before him, stood two massive bulls, like he had never seen in his life. That instant, he had a feeling, this was going to be big. If only, he knew, just how big!
-
Soon everybody in the town knew. The two Indian Bulls looked, well, different. Nothing like what anyone had ever see. They had long ears, and a hump on their back no one could miss. That Louisiana morning '#BosIndicus' had arrived in America.
-
The Desi Bulls were a gift from the British Government to Mr. Barrow.
You see, Mr. Barrow had taught the British officials how to farm cotton and sugar the #AmericanWay. It was something they needed to learn.
Those were the days when #Industrialisation was still young. America - with its slave supported plantations - had been supplying the British cotton since many decades now. India was no longer the source of raw cotton.
Result was that the textile machinery had been developed keeping in mind the American long-staple cotton, not the Indian short-staple.
So the skills on farming the new varieties of cotton had to be learnt from the Americans, and then the knowledge transplanted into India.
The Desi Bulls were a trade-gift from India to America via the British, for this.
--
North America never had any native cattle. The first cattle came here with the European settlers from Spain and England. These were the Bos Taurus, the European Cattle.
Bos Indicus or Zebu cattle is the cattle found in the Indian subcontinent. Known for its hardiness, its fertility, its temperament, its ability to live in tough conditions, and to brave heat, and its inherent resistance to flies, ticks, mosquitoes.
--
In the hot humid South, Richard Barrow, got a full display of the genius of the Bos Indicus. He soon had a mighty solid herd. The envy of many southern cowboys.
By the 1860s New Orleans livestock market was listing the Bos Indicus cattle for sale, they were called, "the big eared Louisiana Cattle".
--
The American south now started seeking the Bos Indicus. From 1854 and 1926, many breeds were brought into America from India.
And so it happened in the early 1920's. In Houston, Texas, four desi breeds of cattle - Gir, Kankrej, Ongole and Krishna Valley - combined to make the very FIRST breed of cattle developed in the United States.
A combination of the genetic strength and resilience the cattle had imbibed in their genes from the Indian soil, the Indian climate.
This new breed of cattle revolutionised the beef industry. Not just in America, but world over.
The new Breeder's Association, formed in 1924 in Houston Texas named this beef cattle "The American Brahman".
--
"Brahman cattle are unrivaled in their adaptability traits.
Their dark skin, serves as a filter for the sun and a barrier for harmful sunlight. Their hair color can range from light grey to red or black, with most animals in a light to medium gray shades.
The Brahman can boast of having nearly eradicated eye cancer within the breed.Brahmans have very distinctive physical characteristics. They have large, upward curving horns.
They are easily recognized by their large hump over the shoulder and neck, large pendulous ears and excess skin around the throat and underbelly. Brahmansâ€™ loose skin increases surface area available for cooling, making them specifically adapted to heat resistance.
Throughout their skin, they have well spread sweat glands. They are able to reproduce, having no harmful effects on their breeding cycle stemming from heat.
When the seasons grow colder, the Brahman can grow a thick winter coat protecting them from the extremes in the other range.
Under their loose skin, Brahmans have heavy musculature giving them the ability to shake off insects. In addition to this, Brahman cattle secrete an oily substance thought to serve as an insect deterrent."
--
Contrast this with how the modern Indian state dealt with the Bos Indicus, after Independence. Just a few examples.
â€˜Antiquated laws made the breeding of many indigenous animals by farmers illegal without a licence from the state's Director of Animal Husbandry. And through some years when livestock inspectors relentlessly castrated the bulls of these â€œinferiorâ€ breeds, boosting the dominance of crossbred cattle.
The Kerala Livestock Improvement Act of 1961 gave â€œthe licensing officerâ€ the â€œpower to order castration of bullsâ€ and farmers ordered to castrate their bulls had 30 days to do so. An amended Act in 1968 also promised fines and imprisonment for those failing to comply.â€™
In Odisha, Kalahandi is a bull, the best breed of Kalahandi, Khariar. Not so far back in 1980â€™s a program to enhance the milk production used artificial insemination of â€˜exoticâ€™ species - from America or Europe - and castrated the Khariar bulls, all but wiping out the breed. The cross breeds failed. They had no strength to survive the harsh climates. What was then a milk-surplus region transformed into a milk-deficit one.
-
Its time to wake up and watch.
I say this for India. But i mean it for each and every region, community, nation. Guard your resources. Recognise and celebrate your own potential, your own strength. If you don't, it will be taken, used - or abused - by another.
Germ plasms can be owned, copyrighted. Then we will have to buy them from corporates. Remember, Neem just got saved.
It is in this context of a community perpetuating, selecting and celebrating a breed that we should be seeing, understanding the Bos Indicus in #Jallikattu.
-
Links
http://www.brahman.org
https://en.wikipedia.org/wiki/Brahman_(cattle)
https://www.amazon.com/Louisiana-Cowboys-Bill-â€¦/â€¦/1589804538
http://www.historynet.com/texas-longhorns-a-short-history.hâ€¦
https://ruralindiaonline.org/aâ€¦/holy-cow-small-is-beautiful/
https://ruralindiaonline.org/â€¦/cattle-class:-native-vs-exoâ€¦/

What is the use, if we still believe what paid PETA and judicial institution force us to do, even many Indians believe them instead of native peoples... Even if u bang them in their heads they won't trust farmers, they think farmers are uneducated and have no knowledge how to raise their cattle...that is the irony here!!!! A bunch of foreign educated brainwashed ppl who never visited any village or seen any cattle are advising the farmers how to take care of their cattle...!!!

I like the article specially the last part. As far as Ayurveda and Yoga goes, we need to celebrate and enjoy our inheritance. I believe, Ayurveda is an excellent medicine system which was never given due credit as we are never proud of inheritance.

What a charming, enlightening article! We do have a tendency to destroy what's ours, with impunity! Sad!

Great Sir, there are so many other species of animals and plants to be preserved from our heritage. No point in interfering in our traditions and heritage looking through the media backed by western countries and institutions.

And, the secret of America's success and SuperPowerdom is finally revealed. ðŸ˜œðŸ˜œðŸ˜œ The logical question is - why is India doing so poorly??? ðŸ˜œ

Yet again we need someone from outside the country to tell us that what we have is better than what is imported... Thanks successive governments and their screwed up policies. They have brought much damage to India. And not the least to say. Greed has wrought this fate. Pay back is a b****!

Definitely we should protect our precious resources for our generation's sake..! Thanks for the writer/ Author of the Text.

Ah that's why the bulls in "Fallout: New Vegas" are called 'Brahmins'

We don't have Brahmin bull. The people Brahmin itself alien to this land. The bulls are indigenous bulls of this land.

Beef cows named Brahmins? You can not insult the Indians more than this. Please remove this absolutely offensive post.

Thank you! I had heard about, the Brahman bull in America, but never questioned, like the Boston Brahmins!

Srivi Bala read this da.. and the other updates and comments by this page on Jallikattu.

A story that shows how our society divides that even animals are known by cast :-( a black spot of Indian history

well written and true to the core