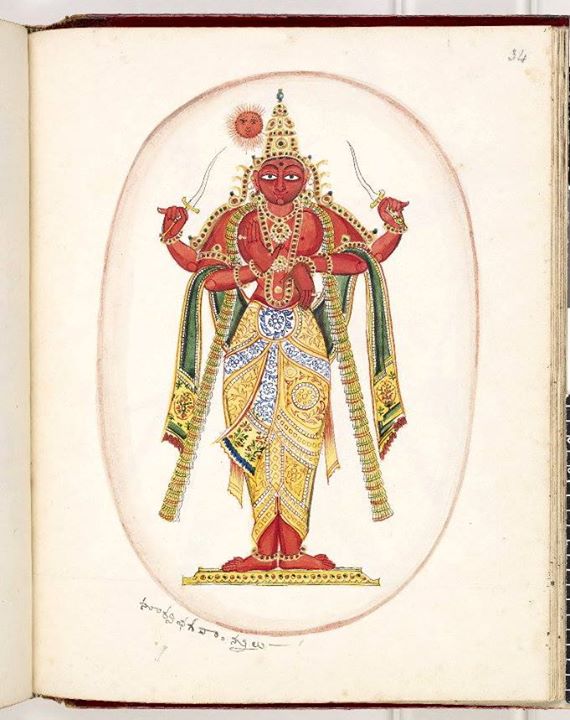 Opaque watercolour painting of the red-complexioned, four-armed and magnificently attired Sūrya. He stands in samabhanga on a low dais at the centre of an oval frame. He carries in each of his upper hands a dagger, while his lower right hand is in abhaya and his lower left in varada mudra. The oval frame may suggest the solar orb.

Company School
1830 (circa)
Painted in: Thanjavur

Curator's comments - Dallapiccola 2010:
This painting is part of an album of ninety-one paintings (1962,1231,0.13.1–91) illustrating gods, goddesses, saints and scenes from Hindu mythology. One of the most interesting features of the album are the eight major temple sites included: Srirangam, Tiruvallur, Rameswaram, Tirunelveli, Palani, Madurai, Thiruvanaikoil (Tiruvanaikka or Jambukeshvara) and Tiruchchirappalli. Furthermore, included in this series are some of the most important murtis enshrined in temples such as Venkatachalapati of Tirumala, Vitthala of Pandharpur and Thyagarajasvami of Tiruvarur. The geographical area covered by the paintings encompasses the totality of the former Madras Presidency and extends into the former Bombay Presidency, giving an insight into the most revered pilgrimage sites in early nineteenth-century southern India.

I'd like to see the other 90 paintings in the album.