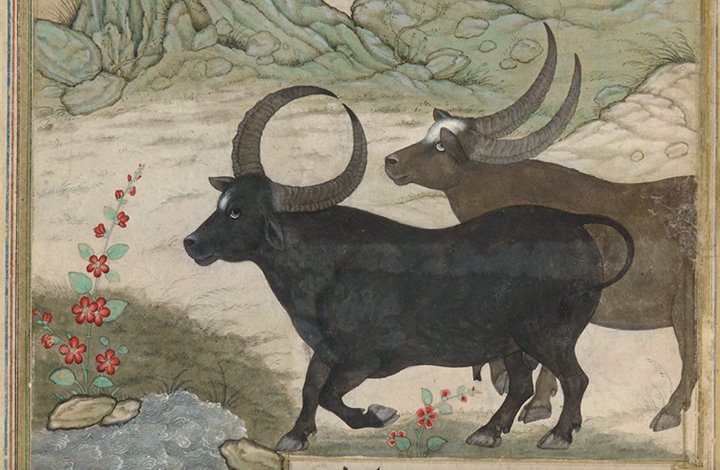 The first Mughal emperor, Babur (reigned 1526–30), wrote memoirs that included precise descriptions of the animals and flowers that he encountered after his arrival in India in 1526. He observed that the blue bull, a kind of antelope, may stand as high as a horse, but it is somewhat lighter in build. The male is bluish-gray, and therefore known as nila-gau [blue bull].

This illumination was placed alongside that text in a copy of the Baburnama made for the private use of Babur's grandson, the emperor Akbar (reigned 1556–1605). Babur's interest in minute details of the natural world was continued by many of his successors and is reflected in both the subjects and styles of the works that they commissioned.

Like many Mughal paintings this was a collaborative effort. Kanha created the composition; Mansur painted it.

Though I believe this illumination depicts the common and the wild buffalo, Ustad Mansur also depicted Nilgai in a later study: http://www.metmuseum.org/toah/works-of-art/55.121.10.13/

I love this. Haven't seen it before.