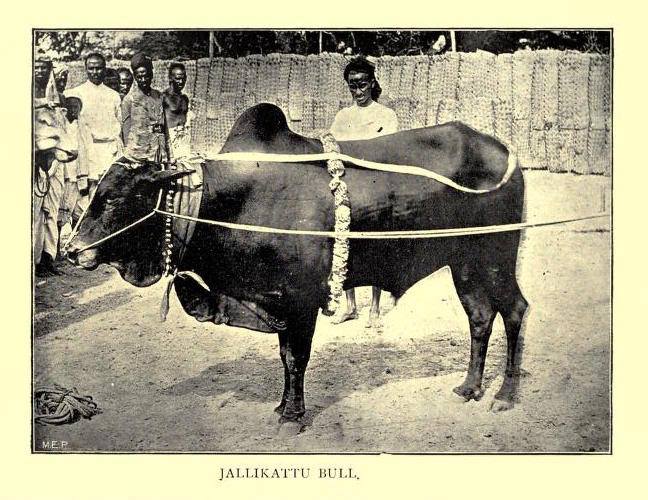 For the following account of the Jellikattu or bull-baiting, which is practiced by the Maravans, I am indebted to a note by Mr. J. H. Nelson. “This,” he writes, “is a game worthy of a bold and free people, and it is to be regretted that certain Collectors (District Magistrates) should have discouraged it under the idea that it was somewhat dangerous.

The Jellikattu is conducted in the following manner. On a certain day in the year, large crowds of people, chiefly males, assemble together in the morning in some extensive open space, the dry bed of a river perhaps, or of a tank (pond), and many of them may be seen leading ploughing bullocks, of which the sleek bodies and rather wicked eyes afford clear evidence of the extra diet they have received for some days in anticipation of the great event.

The owners of these animals soon begin to brag of their strength and speed, and to challenge all and any to catch and hold them; and in a short time one of the best beasts is selected to open the day’s proceedings. A new cloth is made fast round his horns, to be the prize of his captor, and he is then led out into the midst of the arena by his owner, and there left to himself surrounded by a throng of shouting and excited strangers.

Unaccustomed to this sort of treatment, and excited by the gestures of those who have undertaken to catch him, the bullock usually lowers his head at once, and charges wildly into the midst of the crowd, who nimbly run off on either side to make way for him. His speed being much greater than that of the men, he soon overtakes one of his enemies and makes at him to toss him savagely. Upon this the man drops on the sand like a stone, and the bullock, instead of goring him, leaps over his body, and rushes after another. The second man drops in his turn, and is passed like the first; and, after repeating this operation several times, the beast either succeeds in breaking the ring, and galloping off to his village, charging every person he meets on the way, or is at last caught and held by the most vigorous of his pursuers.

Strange as it may seem, the bullocks never by any chance toss or gore any one who throws himself down on their approach; and the only danger arises from their accidentally reaching unseen and unheard some one who remains standing.

After the first two or three animals have been let loose one after the other, two or three, or even half a dozen are let loose at a time, and the scene quickly becomes most exciting. The crowd sways violently to and fro in various directions in frantic efforts to escape being knocked over; the air is filled with shouts, screams, and laughter; and the bullocks thunder over the plain as fiercely as if blood and slaughter were their sole occupation. In this way perhaps two or three hundred animals are run in the course of a day, and, when all go home towards evening, a few cuts and bruises, borne with the utmost cheerfulness, are the only results of an amusement which requires great courage and agility on the part of the competitors for the prizes – that is for the cloths and other things tied to the bullocks’ horns – and not a little on the part of the mere bystanders. The only time I saw this sport (from a place of safety) I was highly delighted with the entertainment, and no accident occurred to mar my pleasure. One man indeed was slightly wounded in the buttock, but he was quite able to walk, and seemed to be as happy as his friends.”

Edgar Thurston CIE (1855-1935) was a superintendent at the Madras Government Museum who contributed to studies in the zoology, ethnology and botany of India and published works related to his work at the museum. Thurston was educated in medicine and lectured in anatomy at the Madras Medical College while also holding his position at the museum. He was assisted in the writing of Castes and Tribes by a colleague from the museum, K. Rangachari, who had also assisted him in a 1906 ethnographic study, Ethnographic Notes in Southern India. Rangachari had supplied most of the forty photographs used in this earlier study.

The September 1910 edition of Nature described the work as:

"...a monumental record of the varied phases of south Indian tribal life, the traditions, manners and customs of people. Though in some respects it may be corrected or supplemented by future research it will long retain its value as an example of out-door investigation, and will remain a veritable mine of information, which will be of value."

Diwan Bahadur Kadambi Rangachari (1868â€“1934) was an Indian ethnologist who served as Assistant Superintendent of the Madras museum. He co-authored the 7-volume ethnographic encyclopedia Castes and Tribes of Southern India along with the British museologist Edgar Thurston. He was awarded the title Diwan Bahadur for his efforts.

I suppose God made men do this event for the Bulls to take revenge for being slaughtered and also delighting the crowd.. We must be happy to see the winning of Bulls over power and money crazy people where politics plays behind...

i feel sad to see the way even sensitive humanbeings are being carried away by such expressions as 'kalaachaaram', veera vilayaattu' etc. there was a tme when war was glorified, but now, as humanbeings have evolved and become more civilized, one feels hesitant to claim so. and they try to explain their justifying war by citing two kinds of war, distinguishing between waging war to suppress and waging war against suppression. when this being the case, where is the need for eulogizing this cruel game? who are we to say that the animal enjoys it? just see the fear-filled eyes of the animal.. killing an animal instantly for the sake of food is not as cruel as this, so to say. it is funny to hear people say that people who have nothing to do with tending cows can't have a say in this and that people tend and nurture these cows as their very children. will they allow such a situation to befall their children, surrounded by people who are out to terrorize it and humiliate it, for having some fun. And, highlighting this as our cultural glory is most repulsive. regards latha ramakrishnan.

Saab, how did you ferret out this information, it's simply amazing. As a school boy I have seen this book, not read it. It was the grantha of the administrators. But sociologists did not give any importance to it.

The correct way to find a powerful breed and stimulate them

The country of God that is our grate Tamilnadu

Is Jallikattu is in hands of few Castes?