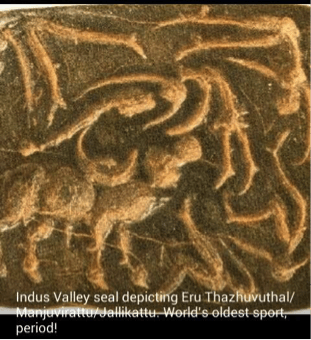 Imagine this scene a few thousand years ago in the Indus Valley region. A group of herders out grazing a few hundred cattle, enjoying the warm sun on their backs with the occasional cry of a calf seeking its mother and the mother guiding it. The whole herd is on the move as the lazy day passes by.

Suddenly a bull decides to run astray. With wild animals lurking, there is the danger of the herd breaking up into smaller groups. A young herder emerges and chases the bull. Bulls being males high on testosterone run quite fast and finally the herder catches up with it. He lunges forward and holds onto the hump of the bull. The hump is a unique feature of Bos Indicus cattle. He manages to hold onto the hump, slowing the bull down and finally stopping it. He leads it back to the herd and the group continues, while showering praises on the young herder for catching the bull.

indus jaliNow imagine this scene repeated on a daily basis and the herders sharing the story with the villagers when they pen the cattle for the night. Over time, the skill of embracing the hump to slow the bull down is celebrated and contests are held to showcase the skill. This is called Eru Thazhuvuthal meaning ‘Embracing a Bull’. Indus Valley civilisation is known for being one of the most advanced and sophisticated amongst its contemporaries. The sport of Eru Thazhuvathal is celebrated so much that they decide to make a seal depicting the same.

During the rule of the Nayak kings, gold coins, wrapped in a piece of cloth were tied to the horns, and the tackler hung on to the hump of the bull and untied the knot to get at the prize. Jalli/salli means ‘coins’, and kattu is ‘tied’. A small bag of coins was tied to the horns of the bulls, which the players claimed as a prize. The only way you could do that was to embrace the hump of the bull long enough to grab the bag without getting hit.

Now a token cloth is tied in the horns which the tackler collects as a trophy. The focal point of the event is the vaadi vaasal, the entrance. The bulls are let through this entrance, into the track, where the players wait. The track is usually the main street of the village, with the side lanes blocked. The event begins with the visit of village elders, led by a band drummer, to the temple of the village deity. The Koyil Kaalai (temple bull) of the host village is allowed first andm as a mark of respect and gratitude to the host village, players allow it a free run and don’t touch it. Today, educated youngsters from these villages are also involved in the rearing of bulls and participate in the sport. All classes of people and all castes take part in Jallikattu. There is an egalitarian perspective where it’s humans and their cattle, nothing more nothing less.

THAT'S WHAT THE MNC's WANT!