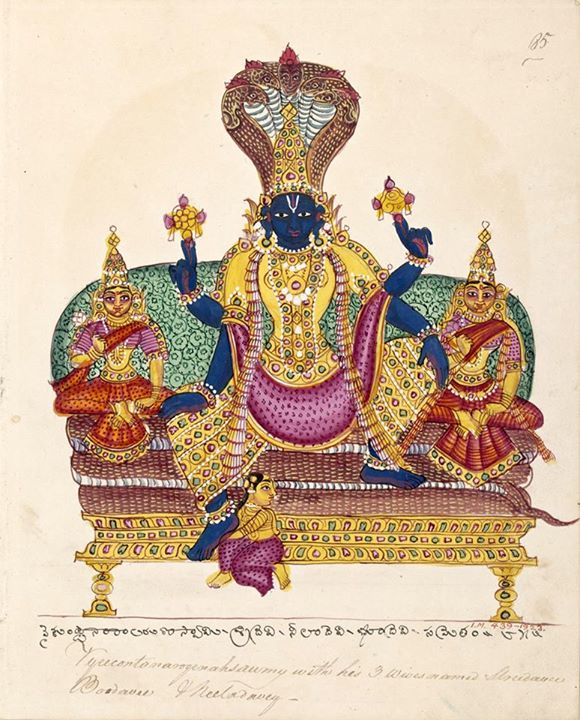 Vishnu as Vaikuntha-natha seated on the coils of the serpent Sesha between his two shaktis, Shri and Bhumi Devi; a third, Nila Devi, supports his right foot. From a series of 100 drawings of Hindu deities created in South India.

Can you explain a little bit about Nila Devi..

Neela devi is daughter of Kumbha, who was brother of Yashoda, mother of Lord Krishna. Kumbha's wife was Dharmada. The couple had a son named Shridaama too, who was one of the closest friends of Krishna. In DraviDa prabandham Neela devi is also addressed as 'NappinnapiraTTi'. Neela devi's father Kumbha declared that one who can take control over seven freely left wild oxens at once and tie them together can marry my daughter. Just like Shri Raama broke Shiva's bow to marry Seetamma, Krishna fulfilled Kumbha's condition and married Neela devi. It is said that Krishna was so fascinated by Her beauty that He did not leave her and used to rest happily in Her company lying close to her. Goda devi comes to wake up Krishna in Margali/Dhanurmaasam and sings, Oh the one sleeping deeply in the company of Neela devi, please get up _/_ I've also heard that she is prakruti and the basic colour of nature is blue, hence the name Neela. It is also said that it is the same Neela devi who is known as Radha ji in northern part of our country. There people address Radhaji as Neelaambaradharaa Radha. In Tiruppavai Goda devi addresses Neeladevi using many adjectives like Nappinnai, Kulavilakku etc.

Yes, even I would be interested to know about Nila Devi...