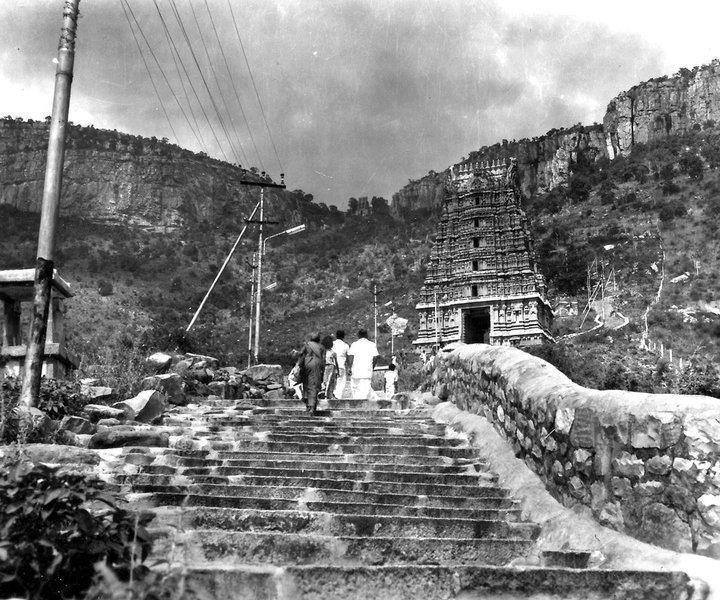 Digital Rare Book:
A History of the Holy Shrine of Sri Venkatesa in Tirupati
By Sakkottai Krishnasvami Aiyangar
Printed at Ananda Press, Madras - 1939

Author's Preface:
The cluster of hills which goes by the name Venkatachalam hills, and the small group in it called the Tirupati hills, have long been the most famous pilgrim spots in South India and the latter has enjoyed an eminence equalled but by a few even up to the present time. It is in the fitness of things that the management, recently constituted for carrying on the administration of the affairs of the temple on the hill and its large properties and income, should have thought of getting a history of the shrine written for the information of the public. The first Committee had this question before them for consideration. Sri Dewan Bahadur T. A. Ramalingam Chettiar's suggestion that I be invited to write the history was readily accepted by the Committee. The Committee's invitation was quite acceptable to me, as it has long been my wish to bring to a conclusion the enquiry, in regard to the history of the temple, which I started so long ago as 1904 in writing a life-history of Ramanuja, which publication came in for important public consideration* in connection with the Govindaraja shrine in Chidambaram. The time was rather propitious also, as the large number of inscriptions

Collected by the Devastanam Department of epigraphy during the last decade had at last been printed and was likely to become available to the public. The history of the shrine in the following pages is based upon these inscriptional records fo the latter period, as they furnish an amount of information for that period, not inferior to that of any other important shrine for the corresponding period. This period has reference to that following the life activity of the Vaishnava teacher, Ramanuja, whose connection with the temple and his actual services to it had long been a fruitful subject of controversy.

For the period relating to Ramanuja himself and his active work of reorganising the temple worship and ritual and putting these on a footing of permanence, we are driven to such information as the material for his life-history would provide. That material is hardly ample enough to give us any detailed information in regard to the details of his organisation. But luckily for us, we have a Sanskrit work composed just a few generations after Ramanuja which bears specifically upon this work. The Committee was so good as to sanction the republication in good form pf a critical edition of this work, of which there was an unsatisfactory Telugu edition, and even that had for some time been out of print. The then Commissioner, Sri A. Ranganatha Mudaliar, deserves all thanks for having enabled me to bring out the edition, in Devanagari characters, of the work, Venkatachala Mahatyam, which gives a detailed account of what took place under Ramanuja, and how that arrangement was allowed to continue since then.

For the period anterior to Ramanuja, the sources of information are not as ample as for the period following. For about three centuries preceding Ramanuja's activity in Tirupati, we have some inscriptions, not many, though some of them do throw much light upon the history of the shrine and the locality surrounding it. For the period before the 8th century, we have to depend entirely upon other sources of information, of which the dominent sources are literature, Tamil and Sanskrit, bearing upon the temple. The classical literature of the Tamils, the so called Sangam works, have just a few references to Vengadam, which formed the northern boundary of the Tamil land according to them, and just a few which would support the existence of the temple at the time, and even of the establishment of the annual festivals for worship in the temple. Proceeding therefrom we have the work of the twelve Vaishnava Alvars, whose age and active work occupied the period from the most brilliant period of the Sangam age on to the last years of the 8th century. These works necessarily have a great deal to say about the temple, as it was one of their holy of holies and came in for elaborate description from their point of view.

While these last sources do have but oblique references in regard to the origin of the temple, they do not supply us with a satisfactorily detailed account, We have to go to the Pauranic
sources for this, and these are all brought together in a Sanrkrit work, Venkatachala Mahatyam, of which there are numbers of editions, several of them not quite satisfactory. A recent edition brought out for the Devastanam and not published, I have been enabled to look through along with the other editions. This work is mainly a collection of what is said in celebration of this holy place in the various Puranas, of which eleven have extensive passages connected with the temple. In their own way, they give us a full exposition of how the self-existing shrine had come to notice, and what services it received from various people from time to time. This account, partaking as it does of the character of all the Pauranic accounts, still seems to let us into the secret of ite origin, and the time when it acually came to be recognised as a human institution.

This photograph might well be from late 60's or early 70's. Look at the lamp posts and the light fittings.