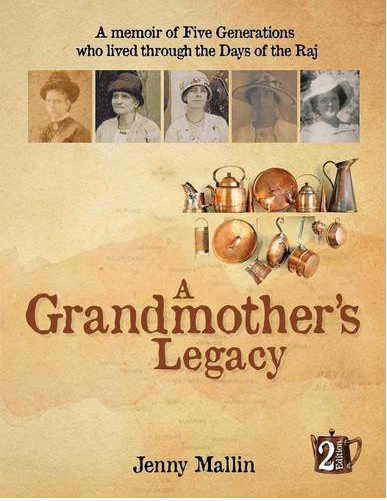 With her passions for cooking, India, research and writing, the outcome has been a labour of love – a memoir which mingles the history of her family, which goes right back to 1844 and British Raj India, with her grandmothers’ recipes that were prudently passed down through the generations. Each recipe has been lovingly researched, leading Jenny on a road of discovery about her ancestors, with her grandmothers’ legacy continuing to assist in providing clues to their rich and eventful past.

"It is a lovely mixture of memories and cooking, and fabulous photos." Nicholas Pearson
HarperCollins

"You have done a wonderful job capturing a glimpse of Anglo-Indian culture and cuisine and I have no doubts that many people would turn to your book time and time again. Your recipes look fabulous and I commend your efforts to bring this book to life." Lisa Ekus
(Cookery/Food Authors Literary Agent)

"One of the tragedies of the 21st century is that we lose the rich traditions of our oral history. The wisdom handed down from generation to generation is often broken and lost as grandparents sporadically communicate with their grandchildren via phone, text messages or skype, rather than spending endless hours planting seeds of sophistication, value and culture of their ancestors in their young minds which often bear fruit only many years later. Jenny has tried to bridge this gap between the traditional and the modern modes of communication by sharing her family history and recipes in this book. It is well presented and interestingly told, intertwined with practical and useful recipes too. If only more women did this, producing delicious food would be a lot easier and the wisdom passed down could possibly make the world a happier place. I would suggest as many people as possible to read, absorb and pass on this book. It is something that every woman can relate to, can learn from and can use, in order to try and leave a lasting legacy behind." Jillian Haslam
Author, Motivational Speaker, Philanthropist & Coach

Would love to read a book like this with Indian recipes

I want to read that

thanks for d information

Would love to read that.

Would love to read it!!!

Would love to read it too

Lovely books I am waiting

Who else loves this ?

She's on FB get in touch with her, she also conducts classes.