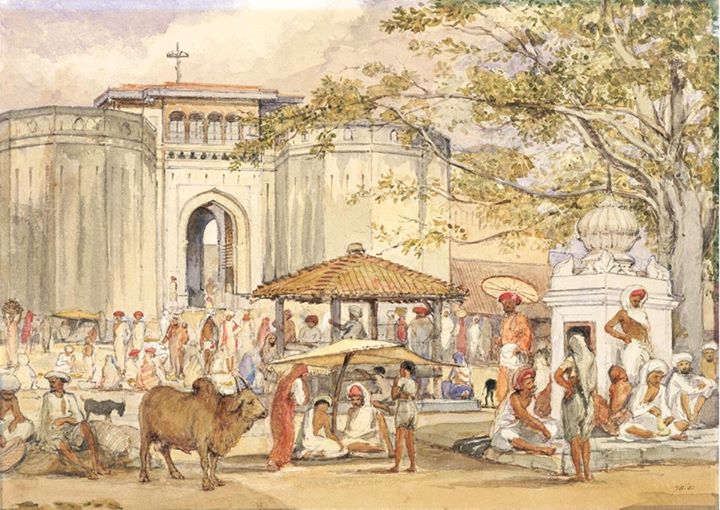 In 1914, the University of Madras appointed Sakkottai Krishnaswamy Aiyangar to the chair of the Department of Indian History and Archaeology. Aiyangar headed the Department till 1929. At about the same time, Aiyangar took over a struggling periodical called 'Journal of Indian History' which was started by Shafaat Ahmed Khan in 1921. Aiyangar faced financial difficulties in the beginning but rescued the journal by persuading the University of Kerala to take over the magazine. By the time, the Kerala University had taken over the magazine Aiyangar had already established the journal as one of the premium history magazines in the world.
- Wiki

Image:
The Shaniwar Palace, Pune, built by Peshwa Baji Rao in 1736, was largely destroyed by fire in 1827/28. This scene includes a small shrine under a tree in the foreground.
By William Carpenter, William

This picture depicts a gateway to the Shanwar Palace in Pune seen from the square, where a vegetable market is being held. The Shanwar Palace, built by Peshwa Bajirao in 1736, was largely destroyed by fire in 1827-28. This scene includes a small shrine under a tree in the foreground.

Thank you for this!!! There is a typo it should say Peshwa Baji Rao I not Peshwa Bai Rao

Where is the shrine under tree today? It has changed drastically

Is there a cross on top of shaniwar wada? I heard that there was an union jack after British rule started

It might be mandai {vegetable market} in front of wada.

The shikhar of hanuman shrine is now changed and now this old stone shikhar can be seen placed near the shrine.