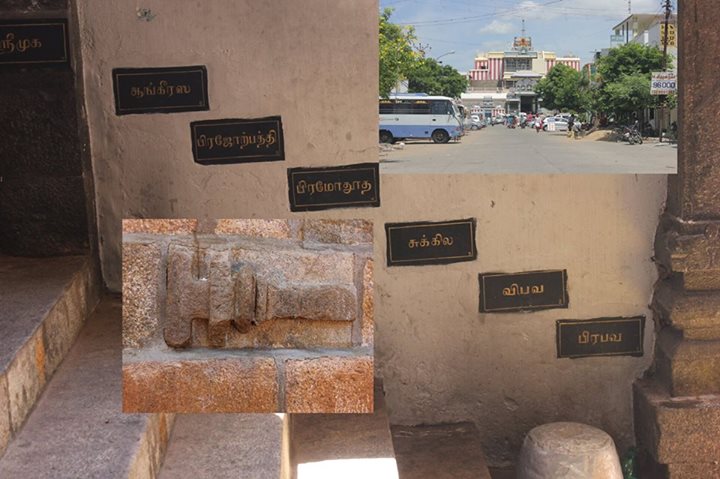 The Swamimalai Murugan temple and the Tamil Calendar
By Raj Vedam

The Swamimalai Murugan temple near Kumbhakonam has existed since the Sangam Era (~500BCE), and later built ornately by the Cholas around 900 CE. The temple was heavily damaged in 1740 during the cannon exchanges between the British and French fighting their wars in southern India via proxies (Hyder Ali), and the current temple was rebuilt since (the temple and walled enclosure served as a fort for the European occupiers, and hence a target for an opposing force).

It was very interesting to note that the temple encodes a 60-year astronomical cycle. The revolution period of Saturn is approximately 30 years, and that of Jupiter, approximately 12 years. Every 60 years, both planets revisit the same zodiacal plane (30 x 2 and 12 x 5).

Each of the 60 steps of the temple encodes one year of the 60-year Tamil calendar. These years, also called Samvatsara, finds mention in the ancient text, Surya Siddhanta (700BCE?), and are an instance of Sanskrit names in the Tamil calendar. The current 60-year Tamil calendar cycle began in 1987-88 and will end in 2046-47. We are now in the 30th year of the current cycle, called Dhunmuki. The only other civilization other than Indians to use the 60-year calendar were the Chinese.

This photo taken on 8th July 2016, shows a few steps with the names of the Tamil calendar. The top inset shows the temple from the front, and the bottom inset shows a delightful stone-key in a holder, the key to the lock of the temple.

fantastic and intresting info...is there any book or information resource on Chola temples ?

How fortunate that is has withstood the ravages of time!