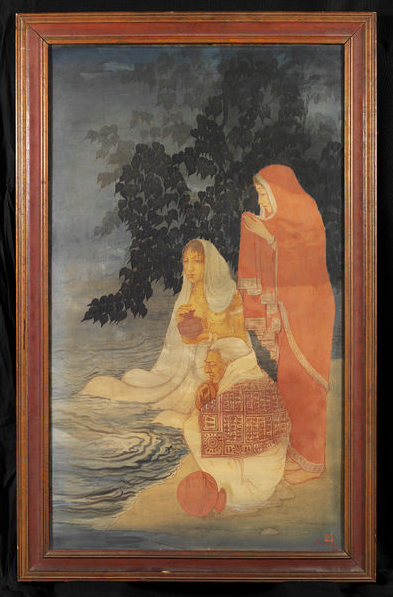 Women offering worship at the Ganges during a lunar eclipse, by Mukul Dey, painting, gouache on canvas, India, Neo-Bengal School, 1922

The scene depicts three women performing propitiatory and purificatory rites by the river bank. An old widow wrapped in 'namabali' or prayer-shawl (with Bengali inscriptions on it), a younger widow as well as a married woman are seen at their prayers and ablutions by the Ganges in fading light. A shadowy 'pipal' tree on the river bank hints at the lunar eclipse. The modelling of the torso of the semi-nude figure shows the influence of Ajanta, while the rippling waves and clusters of 'pipal' leaves shown in relief against a formless background recall Far Eastern models.

Mukul Dey (1895) studied under Abanindranath Tagore, the pioneer and leading exponent of the Bengal School of art, as well as in Japan, the United States and England. Like several other 'neo-Bengal' artists he spent time making copies of the Ajanta cave-paintings, and later wrote 'My Pilgrimages to Ajanta and Bagh' (London, 1925).

INDIAN CALENDARS: COMPARING THE SURYA SIDDHANTA AND THE ASTRONOMICAL EPHEMER by Chia Daphne.