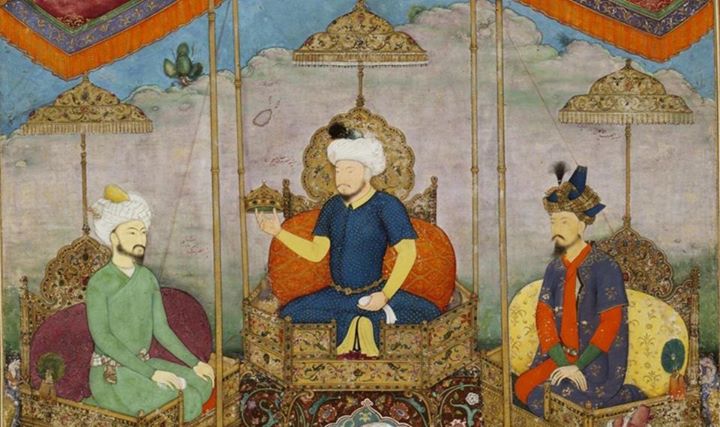 Digital Rare Book:
A History of India Under the Two First Sovereigns of the House of Taimur, Baber and Humayun
By William Erskine
Published by Longman, Brown, Green, and Longmans, London - 1854
Volume 1

Image:
Allegorical painting of the Central Asian ruler Timur, with the Mughal emperors Babur and Humayan, all enthroned and beneath a red canopy, with their respective chief ministers standing before them; opaque watercolour and gold on paper, painted by Govardhan, Mughal, ca. 1630.

Timur (1336–1405), the Central Asian ruler from whom the Mughals were descended, sits in the centre of this allegorical painting handing the imperial crown to the founder of the Mughal dynasty, Babur (r.1526–1530), who is seated to his right. On his left is Babur’s son Humayun, the second Mughal emperor (r.1530–1540 and 1544–1545), who briefly lost the throne and was forced into exile in Iran. All are seated on jewelled thrones beneath parasols, an emblem of royalty. Before them stand their chief ministers, all identified in minuscule Persian inscriptions: on the right is Bayram Khan, with Mirza Shah Rukh and Mirza Rustam in the middle and on the left respectively.

An attribution in black ink on the lower border notes that the painting was done by Govardhan, an artist of the imperial Mughal workshop during the reigns of Jahangir (r. 1605-1627) and Shah Jahan (r. 1628-1658). It may have been done to mark Shah Jahan's accession.

MOGULS: TURKS BY DESIGN ISLAM BY DEFAULT HINDU BY FATE chengzhis fought aristocracy bought in mertiocracy Tamuir followed later inspired....true mougals brought meritocracy and excellance more than they brought in islam to india....the execution can be debeted but not the intension Taimur had standing orders not to slaughter knowlegable men like poets beauracrats astrologers craftsmen but rather be well looked after and taken to samarkand and benifit his empire that was his expansionist strategy ....it was obsessive meritocracy of conqest that took the mongols later the mougals that far as they went. Imagine how clever Timur fumed and freted when all the riches he garnered by excellence was lavished on delhi ,fatehpur, agra and not in smarkand .we the current indian might deny as much as we like but certainly indias heart was bestowed with gold and riches not by islam but by relentless fight to survive of a horseless fatherless resourseless MONGOL little TAMUJIN who made it as big it can get so the world knew him as the KHAN OF ALL KHAN......CHENGIZ.