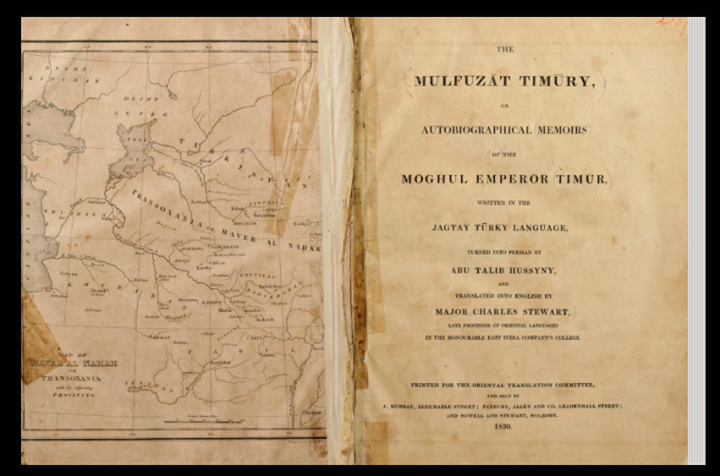 William Erskine, Esq. in his Preface to the Memoirs of Baber, published in 1826, (in praise of which work too much cannot be said) informs us, that he had seen at Bombay, a complete Persian translation of the Autographic Memoirs of Timour, the original of which had been found in the library of Jaafer Pasha of Yemen, and that it appears by Astley's Collection of Voyages, that a person of that name was Pasha of Yemen in 1610. This is of importance, as it nearly fixes the date of the Persian Translation, which is confirmed by the dedication of the work to the Emperor Shah Jehan of Hindustan.

Having thus premised, I proceed to give a description of the Manuscript brought from India by Major Davy, which I have undertaken to translate : it is an Octavo volume, written in the common Persian hand, and as it has never been bound, was probably copied for that gentleman in Calcutta, it is enclosed in an old cover, on which is written in Major Davy's hand ; " This Manuscript, which is a fragment of Timurr's, is very valuable, therefore preserve it with care. N. B. It is to be put in the little black writing box."

The Manuscript contains four hundred and fifty-seven pages ; after the Persian Translator's Preface, it commences with the Institutes, which nearly agree with the printed edition : these are succeeded by the Designs and Enterprizes of the printed copy, after which follows the Book of Omens, mentioned in the 8th page of Dr. White's Preface, and which I might probably also have omitted in my translation, did I not fear the reproach of having left part of my work undone.

It is written in a careless manner, occasionally obscure, with much
tautology, and some repetitions, but without any break in the detail,
except at the commencement of a new year, evidently evincing that the art of book-making has not been employed to set it off, and that it is a translation from a language less polished than Persian.

Was Timur a 'Moghul' emperor?