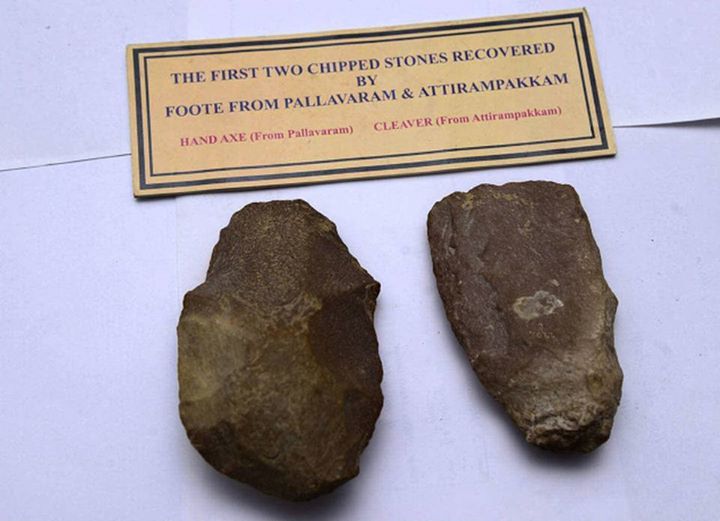 Article:
A discovery that changed the antiquity of humankind who lived in Indian subcontinent
By T. S. Subramanian
The Hindu - May 27,2013

One hundred and fifty years ago, on May 30, 1863, young geologist Robert Bruce Foote bent down and picked up a stone tool on the Parade Ground at Pallavaram cantonment, near Chennai. It turned out to be an epochal discovery.

It was a hand-axe made of a hard rock called quartzite. Prehistoric man had crafted it to dig out tubers and roots from the soil, butcher animals he had hunted and take out the meat, and so on. As Foote, then a 29-year old assistant geologist in the Geological Survey of India (GSI), cradled the hand-axe and looked at it transfixed, he recognised it to be a Palaeolithic tool. (Palaeo means old, lith means stone. Prehistory is that part of history before written records began).

At one stroke, his discovery changed the antiquity of humankind who lived in the Indian subcontinent. It put India on the world map of prehistory. Recent research has established that such tools used by Palaeolithic population in India could be dated to 1.5 million years before the present.

Four months after this discovery, on September 28, 1863, Foote and his best friend and colleague in the GSI, William King, made another seminal discovery. They found numerous stone tools, including hand-axes, cleavers and flake tools, at Attirampakkam, near the Kortallayar river, in Tiruvallur district, 60 km from Chennai. Prehistoric man had used them to hunt animals gathering around waterholes and exploit plant and aquatic resources. Foote found some more stone tools later at Pallavaram and was convinced that a Palaeolithic population had lived in India.