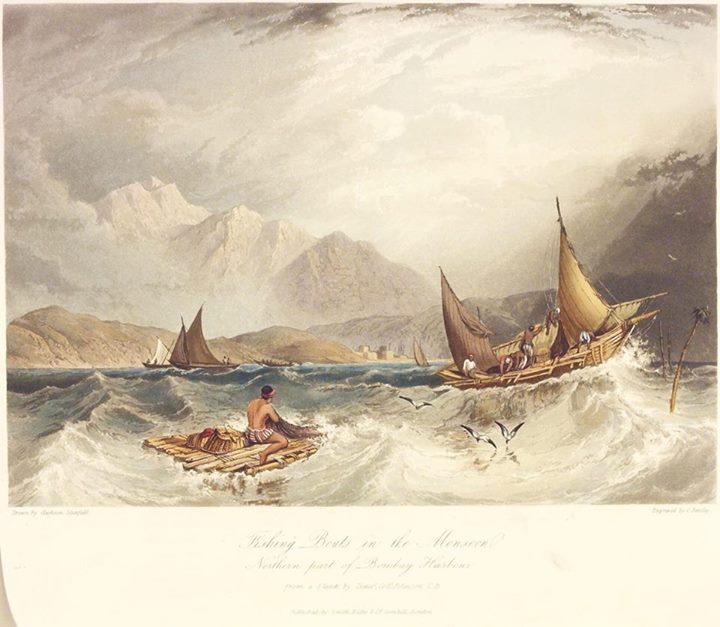 Digital Rare Book:
A practical guide to the climates and weather of India, Ceylon and Burmah and the storms of Indian seas, based chiefly on the publications of the Indian Meteorological Department
By Henry Francis Branford (1834-1893)
Published by Macmillan & Co., London - 1889

Grindlay (1786-1877) served in the Bombay Native Infantry from 1804-20, rising to Captain. Captain Robert Grindlay's "Scenery, Costumes and Architecture, chiefly on the Western Side of India", issued from 1826 to 1830 was a result of his interest in architecture especially the connection between Egyptian and Hindu architecture. A number of original sketches in the book are his own. He was given views of other subjects by Captain Charles Auber, Lieutenant-Colonel John Johnson and William Westall. Several sketches in the book were handed over to professional artists to be worked up into finished compositions: William Westall, William Daniell, David Roberts, Clarkson Stanfield, Copley Fielding and George Cruikshank. The plates were engraved and coloured with unusual care: with etching by one hand supplemented by engraving by another. Even the name of the colorist, J.B. Hogarth, is given. The colouring is elaborate with shadows heightened with varnish to deepen the contrasts.