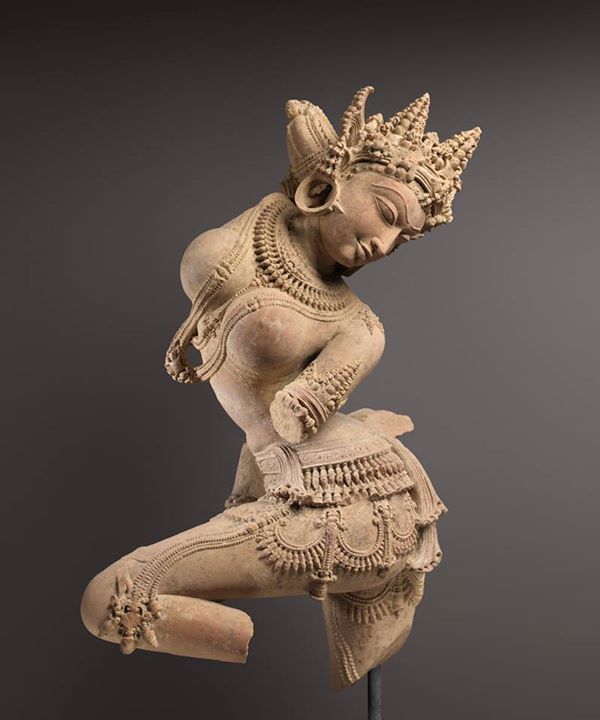 Imagine posing as a model for this dancing female figure. You'll soon realize that this striking pose is anatomically impossible. Yet the sculptor has captured the essence of continuous, whirling motion.

This 12th-century figure ornamented a north Indian Hindu temple, in what's now Uttar Pradesh. She represents one of many celestial or semidivine attendants, dancing reverently for the main deity of the temple. Some temples kept troops of real women who danced for the god to please him.

You can see a stylistic shift away from the plain surfaces of the Gupta era. The eye-catching jewelry and costume emphasize surface ornament-especially as a contrast to the smooth, abundant flesh. The exaggerated pose focuses attention on the figure's lively contours. The spikes on the crown, the swaying necklace, and tassels around the waist amplify the impression of rhythmic, dancing movement, and lend verisimilitude to the abstract body.

I have always felt that the divinity was thought to enjoy the company of women not because they entertained him with dances or so, but because he himself was in awe of feminity. The dances and the shringaar, etc. only accentuate the feminity in women. Even men, who danced and sang, and wrote and recited poetry were looked at as a tad bit more culturally and emotionally evolved. The men explored the feminine traits in them, just as much as women. I love this about our culture.

It's a beautiful sculpture. However, I do think this pose is anatomically possible

I feel proud, that I have landed on the soil of a country from my mother's lap , which is traditionally and culturally very rich !

I am so lucky that I touch that sod which notices DIVINITY in woman!!

As per our " modern India " non sanskari it is!!

what a stunning beauty!

Come to NYC and visit this sculpture in person! Thanks Bindu A.Bambah for the original post.

What a brilliant sculpture. Her features are sharp and her gaze is full of love. I can't help but think this could very well have been a real life danseuse in a real court or temple performing Her art with absolute dedication and oomph. What's more is, it is evident that the sculptor was captivated by her very beauty and has worked a tad bit harder to get the preciseness of this celestial muse, perfecting his every emotion, ornamental finery, curves, aesthetics, etc from every angle. Either the sculptor or the person who commissioned the sculpture was bowled over by this maiden's sight, only then such a magnificent piece was created. A master piece indeed!!

What a workmanship ..too good