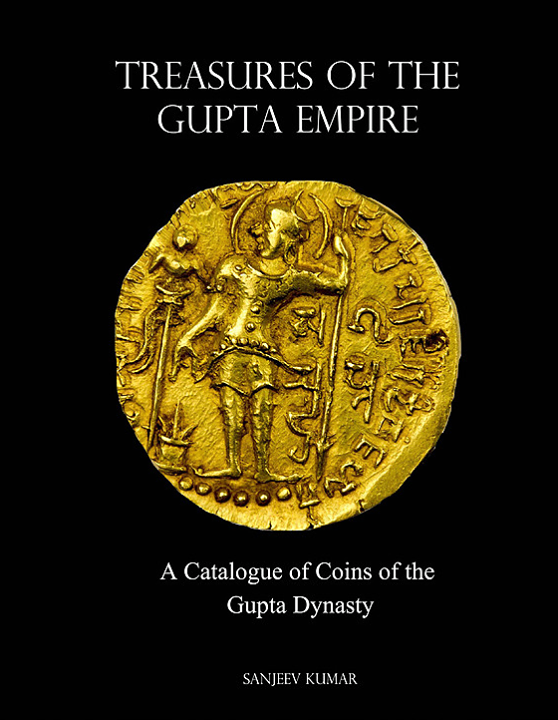 This book covers the history and the entire Coinage of the Gupta Dynasty from the start in 319 AD to it's end in 543 AD. It also includes the Coinage of the Later Guptas and the related dynasties of Bengal. The author has illustrated every coin variety in Gold, Copper and Lead as well as a complete range of all known Silver coins with dates struck by the Gupta kings. The classification is comprehensive and intuitive.
?
The book includes an excellent section on the iconography, metal analysis, history and the evolution of the designs seen on the Gupta gold coins. This book is an quintessential guide for Collectors and Dealers in coins to better understand the relative rarity and the different varieties with a full representation of the coins from Private Collections and most of the major Museums in India and across the world.

While coins have existed for over two thousand years in India, none have matched the sheer beauty and complexity of design as the coins issued by the kings of Gupta Dynasty from the 4th through 6th century AD.

Starting from the first of the Gupta kings, Chandragupta I in 319 AD, to the last the King Vishnugupta in 543 AD, their coins are a historical record detailing the evolution of the Gupta style and its impact on religious art from this golden age of India. The clues hidden in the coin designs, legends, dates and metrology all speak volumes and have here been deciphered to help reconstruct the history of the dynasty. In this book an attempt has been made to catalogue the entire coinage in gold, silver, lead and copper, listing all known coin types and varieties. The book also includes a detailed analysis of the designs, dates and metrology and an extensive discussion of the history of the Gupta Empire.

The last complete catalogue of the Gupta Dynasty coinage was published by Dr. A.S. Altekar in 1957, and since then no one has been successful in fully cataloging the entire series. This work, published here on the 60th anniversary of Dr. Altekar’s seminal work, is a continuation of that effort to fully document the coinage and to understand it's impact on the history of India. It includes the rarest of the coins, published here for the first time, from major Museum collections in India, and around the world as well as private collections, most of which are inaccessible to researchers.

The book is designed as a guide for collectors, scholars and history buffs alike. It will help researchers fully understand the complex history and inscriptions, as well as the vast and beautiful coinage of the Gupta Dynasty and will serve as a comprehensive reference on the Gupta Dynasty numismatics.

Mr. Sanjeev Kumar is Chairman of the Shivlee Trust and is an independent researcher and numismatist who has spent an entire lifetime studying the history and coinage of the Gupta Empire. He is considered one of the world's foremost authorities on Gupta Dynasty coinage.

This book is a culmination of a love affair that sprouted from the mind of a young child growing up in India. The stories of the great Gupta kings and the legendary King Vikramaditya, his exploits and treasures are now fully documented here for everyone to enjoy.

Hi Rita, the Gupta coins have Sanskrit legends written in Brahmi script. The coin featured on the cover of this book is a Javelin Type coin of Samudragupta. The king's name Samudra or Samudragupta is written vertically below his left arm which is bent upwards and holding a javelin with the spearhead pointed down, resting on the ground. With his right hand, the King is offering oblations to the fire altar. The Garuda standard is on the left. A crescent symbol is shown on some varieties, and on others we see that the king has a crescent either on the side of his head or as a crescent topped crown/diadem. On some coins he has a dagger on his belt at his waist. The king's attire does retain the Kushana style on most of these coins but on some coins struck late in his reign, we can see the king wearing the Indian dhoti style clothing (Variety A.8). The circular legend on the obverse starts at one o'clock or seven o'clock and is the same on all of the coins in this type - Samara?atavitata vijayo jitaripurajito diva? jayati - "The invincible (King) who had won the victories on a hundred battlefields and conquered the enemies, wins the heavens".

Economy is stable only in gold standards. Whether you see economic system of India or middle East.

Osm, result of the gr8 effort of author

Does this coin also have Roman script on it?

Kindly give us the information to order

How much is it

This could be would be very informative and treasures of information . Indians had problem of not writing history . Therefore Info are gathered thru Pillars engraving , stone rocks engraving and lastly Coins ! How're Gupta period is considered as Golden era of India during which Indian development was all around , literally , artistically and was most prosperous . Perhaps after this dynasty Hindu kingdom collapsed, Finally replaced by Arab invasion started after two hundred years in 7th century .

Murthy Macherla check this out..

Gupta ji though master pieces don't have the prices but you should quote it For retire and persons like me.

Congrats Shivlee Kumar Gupta ji. Id like to have this book. What else us development. When you'd be available to meet ? Dr Shailesh Gp Gupta .

The book launch is tomorrow Jan 18th at the National Museum Delhi at 5pm by the Minister of Culture Dr. Mahesh Sharma. All are invited, attire is formal. Invitation is attached.

I have seen a another coin of Samudra Gupta, second ruler of Imperial Gupta, where he was playing Vina, or a Stringed Instrument. However, Gold Coins of later Guptas were debased, due to decline!

who can identify this copper coin