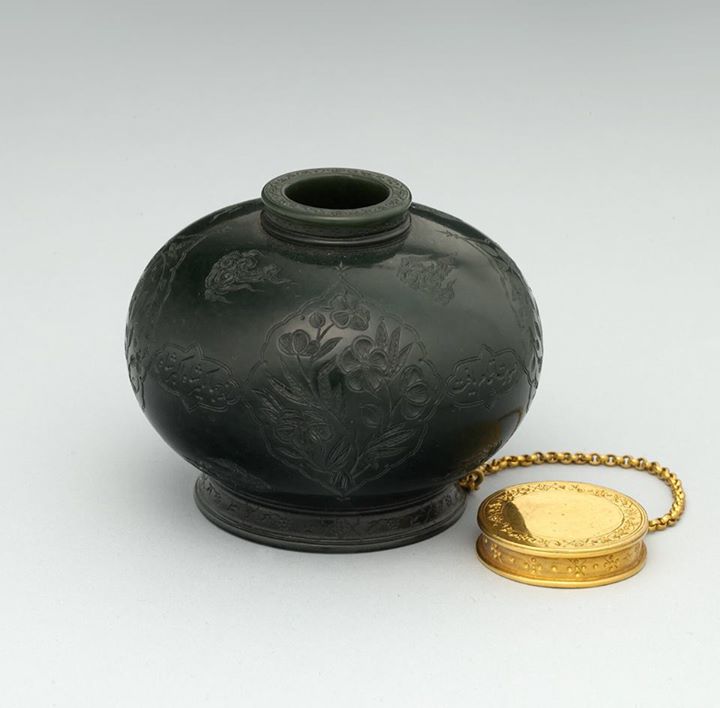 Sturdy, monumental, artfully rounded, richly adorned, and so weighty and well balanced that it could hardly be overturned, this dignified and useful inkpot can be seen as a poetic visual symbol of the empire inherited by Jahangir. If his father, Akbar, commissioned works of art as elements of a dynamic imperial vision, the son did so for delectation and spiritual nourishment. His miniatures, architecture, objects, and autobiography, the Tuzuk-i Jahangiri, reveal him as a responsible–if quirky, warm-blooded, and sometimes cruel–ruler, whose aesthetic concerns left enough time and energy for essential statecraft. Few rulers in world history match his artistic discernment or breadth of taste. He collected pictures and objects from the Islamic world and beyond: Chinese porcelains, Augsburg gilt-bronze statuettes, engravings by Dürer and the Flemish Mannerists, and Renaissance jewels as well as Persian miniatures. On coming to the throne, he released a large proportion of the imperial artists and craftsmen to feudatory courts and to the bazaar workshops, keeping only those whose work met his standards of seriousness and restraint.

Strange ! The object..inkpot does not match the specifications of being An Inkpot...seems more like a 'storage pot', because I can't see any groove to support pen which we generally find Inkpots.

Was he alamghir buried in the mahal of noor , shah bride?

Amazing - past civilisations, must be wonderful to study.

What an exquisite Ink Pot

Wondering how they were maintained all these habits