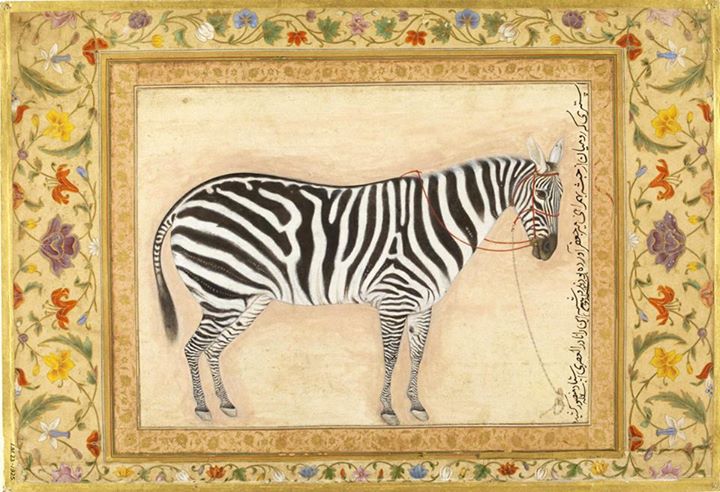 A Zebra, by Mansur, opaque watercolour and gold on paper, Mughal, 1621.

The zebra in this painting was presented to the Mughal emperor Jahangir (r. 1605-1627) by Mir Ja'far who had acquired it from some Turks who had travelled to India from Africa. Jahangir wrote on the painting (in Persian, the court language) that it was: 'A mule which the Turks in the company of Mir Ja'far had brought from Abyssinia in the year 1030 [1620-21], completed by Nader al-Asri [Wonder of the Age], Ustad Mansur"'.

When Jahangir had carefully examined it, and ensured that it was not, as some thought, a horse on which someone had painted stripes, he decided to send it to Shah Abbas of Iran, with whom he often exchanged rare or exotic presents.

The painting is part of a group known as the Minto Album, now divided between the V&A and the Chester Beatty Library, Dublin, all of which were done for Jahangir or his son, Shah Jahan (r. 1628-1658).