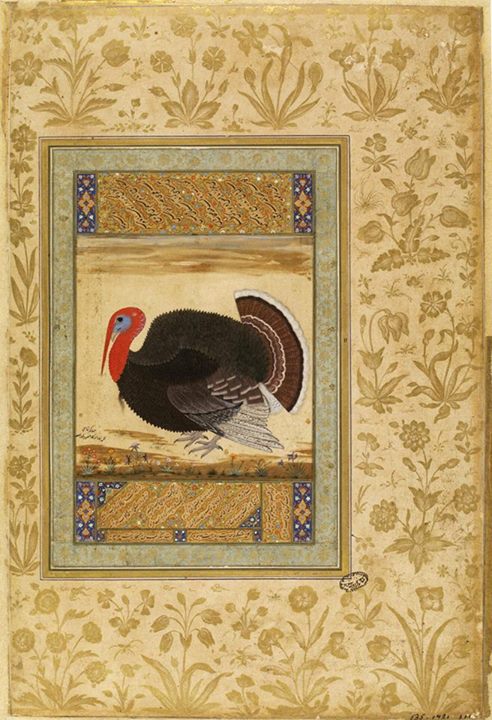 The painting of a North American turkey cock done for the Mughal emperor Jahangir (r. 1605-1627) records its arrival at the court in 1612. Jahangir had asked his friend Muqarrab Khan to procure rarities of any kind at the port of Cambay, on the western coast, and in 1612 a consignment of exotic birds and animals caused a sensation. Jahangir wrote: "as these animals appeared to me to be very strange, I both described them and ordered that painters should draw them in the Jahangir-nama ["Book of Jahangir", the emperor's memoirs, so that the amazement that arose from hearing of them might be increased. One of these animals in body is larger than a peahen and smaller than a peacock. When it is in heat and displays itself, it spreads out its feathers like the peacock and dances about. Its beak and legs are like those of a cock. Its head and neck and the part under the throat are every minute of a different colour. When it is in heat it is quite red - one might say it had adorned itself with red coral - and after a while it becomes white in the same places and looks like cotton. It sometimes looks of a turquoise colour. Like a chameleon it constantly changes colour." The painting, signed by the leading artist of the court Mansur, was preserved in an album, probably during the reign of Jahangir when the floral borders were added to it. At an unknown date the album was dismembered, and this page was part of a group of folios bequeathed to the museum in 1921 by Lady Wantage.

I was in Istanbul, Turkey a couple of years back and out of curiosity i asked the hotel manager what they would call a Turkey(bird). They call it as 'Hindi' !!! A bird from Hindustan.. Even today they refer India as Hindustan.

North African Abbysinian Pheasant was bought by Ottomans to Turkey, taken to America by British during Pilgrims journey, Bird renamed as 'TURKEY' used during -'Thanksgiving'-.