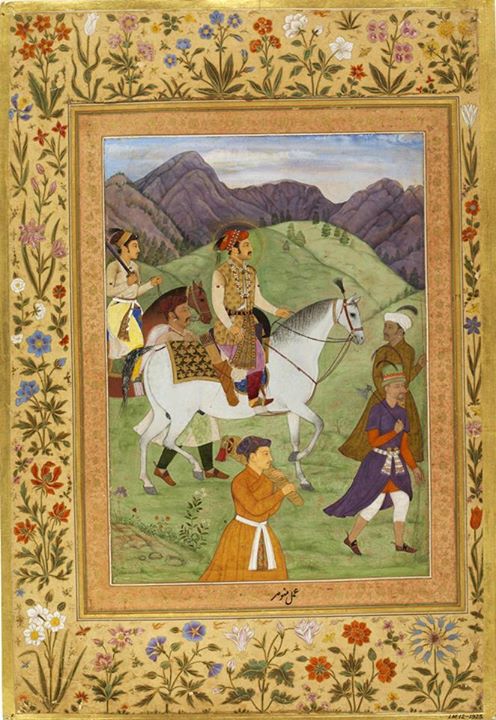 Digital Rare Book:
The Embassy of Sir Thomas Roe to the court of the Great Mogul, 1615-1619, as narrated in his journal and correspondence
By Sir Thomas Roe
Edited by William Foster
Printed for The Hakluyt Society, London - 1899
Volume 2

Image:
Painting of Shah Jahan with his son and a servant, opaque watercolour and gold on paper, faces of Shah Jahan and his son are replacements for the original portaits which were presumably of Jahangir and Shah Jahan as a prince. The overall painting is by Manohar, c. 1610-15, with replacement portraits signed by Murar, and probably done in about 1630.

This painting which was originally in an imperial Mughal album depicts the emperor Shah Jahan (r. 1628-1658) riding on a pale grey horse through a landscape accompanied by a prince behind him, also on horseback, who is presumably his son, Dara Shokuh. Various retainers are on foot. The painting has been mounted on an album page with floral borders, and has a pale pink border with gold scrolling decoration containing an attribution to Jahangir's leading artist Manohar in black ink at the bottom. Overall, the painting has Manohar's distinctive colour palette, and is in the style of the reign of Jahangir, of whom this must originally have been a portrait. However, minute inscriptions in black ink above the head of the brown horse, and beneath Dara Shokuh's left hand, specify that the faces are the work of a different artist, Murar, whose known work falls during the reign of Shah Jahan after his accession in 1628. Thus, the original faces of Jahangir and a prince have been replaced with those of Shah Jahan and, presumably, his son Dara Shokuh.