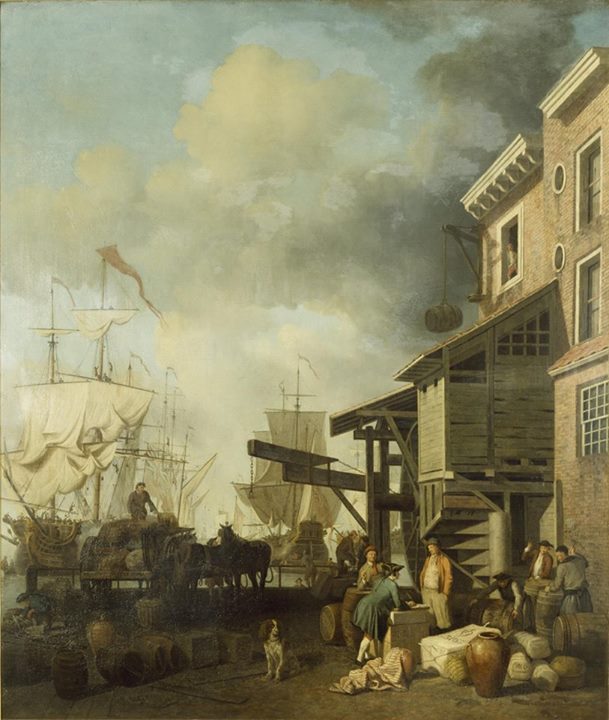 London began in ancient times as a small settlement next to a crossing point of the Thames, and until the mid-19th century the river was still the main route through which all the trading wealth flowed into the City. The docks were literally the gateway to the world, filled with a huge mass of shipping. London has changed so much since the 18th century that it is now difficult to identify the exact location shown in this picture. There is some evidence that it represents the Old East India Wharf, as there is the mark 'UEIC' (United East India Company) on a bale. Therefore the traditional title of this painting may be correct. There were many such wharves on the Thames, with their wooden treadmill cranes for unloading the merchandise.

Samuel Scott (1702?-1772) and other artists began to paint views of the River Thames after Antonio Canaletto (1697-1768) arrived from Venice in 1746. The Italian became the most famous and successful painter of London riverside scenes, and British artists soon followed his example.

Samuel Scott was a marine painter and a drinking companion of William Hogarth (1697-1762). He was commissioned by merchants, sea captains and naval officers to paint pictures of riverside and sea scenes and naval engagements.

My 6th g.grandfather was a shipwright and carpenter, building East Indiamen, during this time. This pic tugs at my heart strings a bit! :)