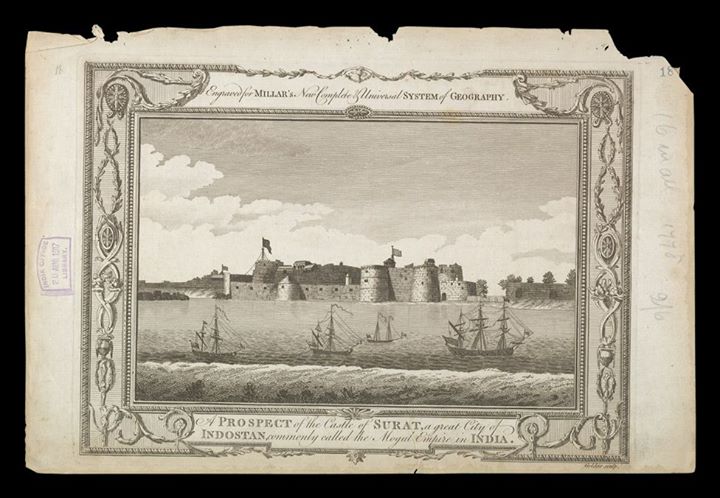 Digital Rare Book:
The English factories in India, 1618-1669
A calendar of documents in the India Office, British Museum and Public Record Office
By Sir William Foster (1863-1951)
Published by Clarendon Press at Oxford - 1906

Image:
A Prospect of the Castle of Surat, a great city of Indostan, commonly called the Mogul Empire in India - 1792

Engraving of a prospect of the Castle of Surat by John Goldar (1729-1795) for Millar's New Complete and Universal System of Geography dated 1782. Situated on a bend in the river Tapti, Surat was an important Mughal trading port from the late 16th to the late 18th centuries. In 1615 Sir Thomas Roe successfully negotiated a treaty in order to set up English Factories at Surat and other suitable sites. Dutch, Portuguese and French merchants were also permitted to trade in Surat during the 17th and 18th centuries but by the late 18th century the British had complete control of the port. In 1837, due to fire and floods, the town's trading base declined significantly and many Parsi and Jain merchants moved their businesses to Bombay which later surpassed Surat as the west coast's premier port. More recently Surat has become well-known for cutting diamonds as well as manufacturing textiles and chemicals.

Sir William Foster and a Mrs Salisbury between them transcribed a great many volumes in this series. I have tried to read many of them in the British Library, but there are only so many pages you can read a day, and only a limited number of opportunities to visit the library. It is great that at last these volumes are becoming available digitally and also in print. They are so full of detail about the period that I find it hard to read online. I find that I am slowly accumulating reprints of these volumes. It is fun visiting the locations on Google Earth, as much of the trade was to cities along the Ocean coast that were later bypassed by the development of Bombay, Madras and Calcutta. The superceded cities are often still surprisingly undeveloped, and it has been possible to spot locations on the ground from the period. The other abiding impression one gets is just how marginal the trade was at first, and how so many of the merchants came to grief of illness or ship wreck. Also just how dependent the EIC was on credit granted to them by the larger Indian merchants, who must have often had fortunes at their call that were larger than the fortunes of the English promoters back in London.

History of the Military Transactions of the British Nation in Indostan 1765 by Robert Orme has better etchings of Surat and other Moghul towns and early MAPS.