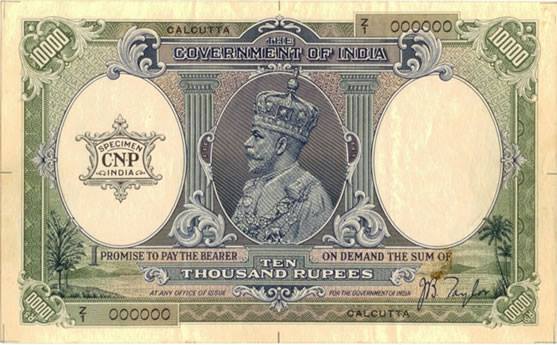 Digital Rare Book:
The Monetary Problems of India
By L.C.Jain
Published by Macmillan And Company, London - 1933

Image:
SPECIMEN RS.10,000 KING GEORGE V BANKNOTE
Printed at Currency Note Press, Nasik
This was also the first note to be demonetised in 1946 and later in 1978 according to RBI data.

Currency Note Press, Nasik - the Beginning:
In 1922, Lt. Col. G. W. Willis, Master of Mint at Bombay and F.D. Asooli, Controller of Printing and Stationery, Government of India, Delhi, were appointed to explore the feasibility of printing notes in India. Based on their report in 1924, the Government of India arranged to set up an experimental press. Also to test the possibility of security printing in India. During 1925-26, the Government decided to terminate the contract with the Bank of England for the printing of currency notes with effect from January 1, 1928. This was originally to expire in June 1929.