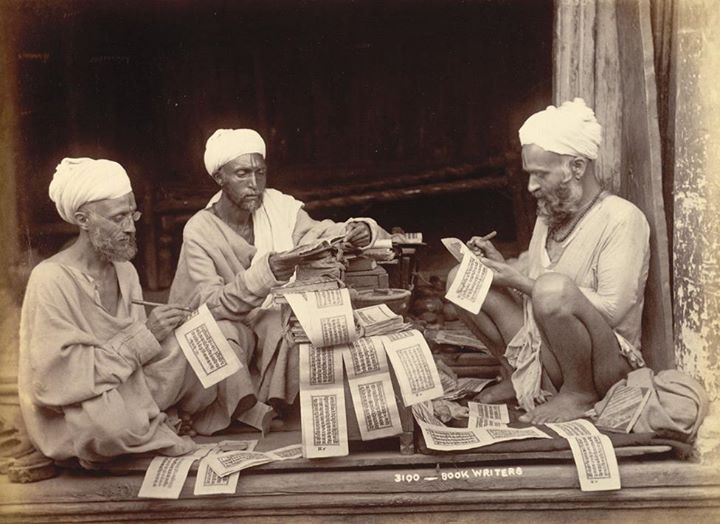 Photograph of three Hindu priests writing religious texts in the modern-day state of Jammu and Kashmir, taken by an unknown photographer in the 1890s. This thre members of this group of Brahmins, members the priestly caste, are engaged in copying out sacred texts from which they read as part of their duties at ceremonies and festivals. Brahmins may also act in a secular capacity as bankers or money lenders.

First of all I may clarify that this photograph of a specific job renders should not have been included under the topic money lenders.They did write scrolls and belonged to a specific category of Brahmins who copied or wrote any scroll themselves.The Brahmins in the picture belonged to a particular family and their category had a specific name and identity but we're not money lenders.Since there was only one class of society amongst the Hindus of Kashmir who were called Kashmiri Brahmins and any one doing a job of a money lender could be a Brahmin but not those in the illustrated picture, there were more Muslim money lenders in Kashmir than Hindus.Thus , it is not a factual position what is mentioned in this post.