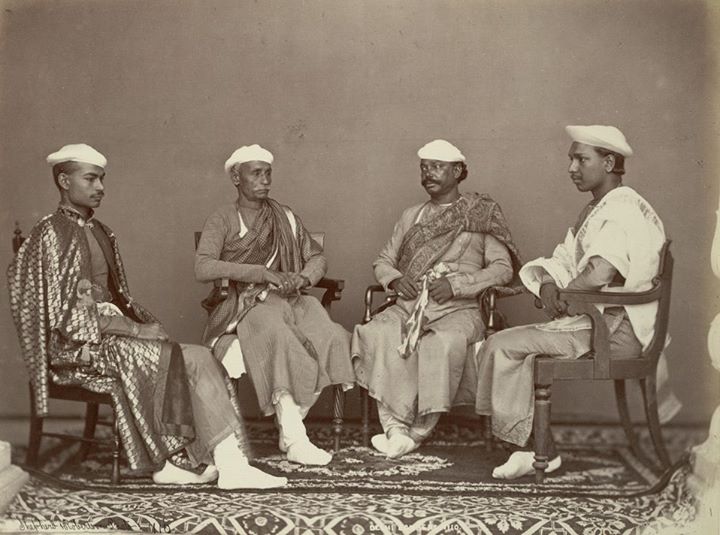 Photograph of a full-length group portrait of four seated men, described as bankers in the caption, from Delhi in India, taken by Shepherd and Robertson in c.1863.

Chanakya laid the Foundation of Banking in India during Mauryan time Bankers were called "Sreshtin" (abbreviated to Seth) were the first Bankers in India during Mauryan time spread all over India and Afghanistan They popularized 'Mudia' (Modi) shorthand script for communication in Trade and Banking . These Vysya caste Seth's spread all over India for Banking and Trade with 'Hundi' system, financing Rulers, Zamindars, Merchants,Traders and pesants were called :- 'Seth' or "Sethi",- in NW India 'Sethia' in Gujerat, 'Sathe' in Maharashtra, 'Setty' in Vijayanagar Empire,(Karnatak) Schetti or Chettiar in Chola empire Reddy in Golkonda Sett's in Bengal These Vysya, spread all over India and Afghanista, were of Merchant class, Agrawal, Oswal, Vaishnav, some followers of Mahavir Jain . 'Seth's paid / transfered merchants money thru a 'Hundi' system, and maintained own mail service. Tavernier, the French jeweler merchant travelling from Surat to Golkonda was paid 14.5 Silver Rupia for every Gold Mohur (Asharfi) on hundi Wealthy Jagat Seths advanced money to Rulers and Kings Merchants, Businessmen Traders, maintained own armed guards for protection when needed and Charged 3 to 6% interest on mortgage or borrowings. 'Jethmal Bhojraj ' were Bankers to Government of Tibet, Bhutan, Sikkim and Nepal till 1960. They were asked to obtain Radio Wireless equipement from Calcutta's Marconi Company by Heirich Harrer and Tibetan Govt of Dalai Lama in Potala in 1946 to obtain information of Koumingtan and Communist Soldiers pushing to Shigatse in eastern Tibet. The Bankers safely carried all the wealth of Tibet on hundreds of Mules, Horses and Yaks from Lhasa to India during invading Communist in 1949. After loosing Himalayan clients in 1959, the firm closed down. . (There were well known 'Jain' Jagat Seths at Jiaganj, Azimganj like Omichand, Hazarimull, Nowlakha, Dudhoria, Karorimull, Lodha, Sethia who helped finance the Moghul Subedars at Murshidabad and British East India Company at Calcutta.They were custodian of wealth of Clive, Hastings and others. Seths were appointed 'tahvildar' by E.I.Company to pay annual pension to exiled Nawabs of Murshidabad,Tipu family, Wazid Ali Shah and others before transfer of Toshakhana from Berhampore to Calcutta)