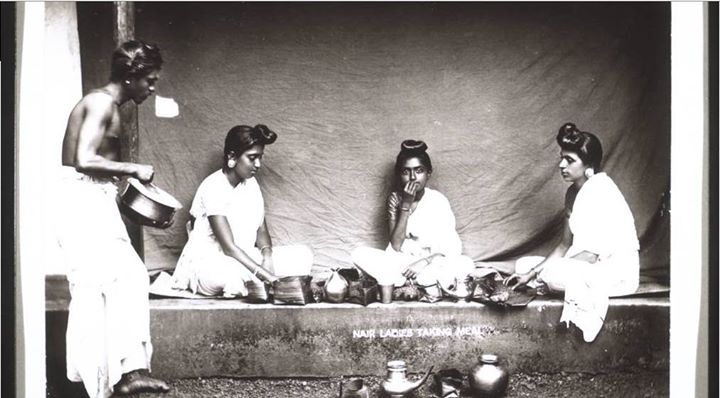 Essay:
On Matrilineal Nairs , Diversity , and the nature of Uniformity to destroy Diversity
By Sunny Narang

The Khasis of Meghalaya and the Nairs of Kerala are both the uniquely matrilineal clans of India .

Jaintia and Garos are also matrilineal in Meghalaya but not so well known or historically powerful.

The Matrilineal system is said to be adopted according to one theory among Khasis , due to the fact that men are always fighting and dying so the land , the true measure of wealth should belong to the mother and helped in managing it by her brother .

The Nair Tharavad or the Khasi home always had a woman as its head , men married or created relationships with daughters and lived in the woman's home or just had visitation rights and all children belonged to the woman and the maternal home . The daughter carried the role of the Matriarch forward .

The amazing continuation of the Matrilineal systems in families among Khasis and Nairs despite being surrounded for hundreds of years around Patriarchal tribal , community and religious systems , all mainstream religions are Patriarchal , like Hinduism, Christianity, Buddhism , Jewish and Islam .

In all of human experience , very few communities have had "alternate" systems and they have always been very small communities , including Tuareg of North Africa and many others .

This alone stands for me, as the main reason why cultural diversity should be nurtured , supported and celebrated .

Once you read what Tipu Sultan had to say about the Nair "sambandham" system , you will understand how no mainstream religions anywhere , or mainstream cultures can deeply handle diversity .

So the way is to always celebrate diversity and hold a state on that foundation . On pluralism and shared love of each other's cultures .

And so I always am against any "Uniform Civil Code" , as then they Centrally define and destroy diversity .

The Captivity of Nairs at Seringapatam was imposed on the Nair Hindus of Malabar by Muslims under Tipu Sultan, the de facto ruler of the Kingdom of Mysore from 1786 to 1789. They were subjected to forcible conversions to Islam, death, and torture. The Nairs were treated with extreme brutality by the Muslims due to their strong adherence to the Hindu faith, their rituals and martial tradition.

Tipu saw them as snake-worshippers and saw their practices to be immoral. In 1788, Tipu Sultan gave strict orders to his army under to "surround and extricate the whole race of Nairs from Kottayam to Palghat".

This incident is known as The Order of Extermination of the Nayars by Tipu Sultan. After entrusting Calicut to a powerful army contingent, he instructed it "to surround the woods and seize the heads of all Nair factions".

In 1788, Tipu issued a proclamation to the Nairs of Malabar, wherein he outlined his new scheme of social reform:

"From the period of the conquest until this day, during twenty-four years, you have been a turbulent and refractory people, and in the wars waged during your rainy season, you have caused number of our warriors to taste the draught of martyrdom. Be it so. What is past is past. Hereafter you must proceed in an opposite manner, dwell quietly and pay your dues like good subjects and since it is the practice with you for one woman to associate with ten men, and you leave your mothers and sisters unconstrained in their obscene practices, and are thence all born in adultery, and are more shameless in your connections than the beasts of the fields : I hereby require you to forsake these sinful practices and be like the rest of mankind; and if you are disobedient to these commands, I have made repeated vows to honour the whole of you with Islam and to march all the chief persons to the seat of Government."

The captivity ended when Nair troops from Travancore, with the help of the East India Company defeated Tipu in the Third Anglo-Mysore War. It is estimated that out of the 30,000 Nairs put to captivity (including women and children), only a few hundred returned to Malabar alive

Nairs are a group of communities in Kerala .

There are many subdivisions in Nairs.

The real history regarding the origin of Nair Community is disputed and uncertain. Some argue that Nairs are the descendants of Newars of Nepal which later migrated to Kerala. They push their argument with citing similarities between the architecture of Nair Homes and Tempes of both Newars and Nairs.

Another argument is that Nairs are Kshathriyas (Nagas) who belonged toNagavamsham who later cut themselves the sacred thread and migrated to the Souther Part of Indian subcontinent. The culture of Nairs are connected with the Serpent Worshipping. They became feudal lords in the Chera Kingdom attaining social and economical prominence in the society. They were doninent in the pre colonial era in Kerala in Administration, Military and Socio Economical sectors.

There are historical notions that they fought against the Cholas as suicide squads to protect the Chera Dynasty.

The evolution of name Nair does not have a clarity where many argue that it is the corrupted form of Nayak, Nayudu of other southern parts of the country where some argue that Nair was evolved from the Nagas since they were assumed to be the descendants of Nagavamsham.

Functionally, they were Kshatriyas since they acted as warriors and feudal lords.

The position of Nairs in the Kerala society was sort of similar to that of Samurai in japan. Both served as warriors & feudal lords.

The land was usually owned by the Nairs but was tilled by the agricultural castes such as pulayars.

The Nairs in turn took the role of defence and administration.

Nairs were a martial race. They practiced Kalaripayattu, the traditional martial art of Kerala. They vowed allegiance to naduvazhis (kings) and were expected to give their life for them. Every Nair boy joined kalari (military training school). Women were also given training in kalaripayattu up to a certain level (usually until onset of menses).

Travancore's Nair Pattalam (Nair Brigade) was famed for its strength.

Travancore decimated the Dutch East India Company's forces in The Battle of Kulachal, effectively ending the Dutch influence in India. The Nair Pattalam proved to be more than a match for the technologically superior Dutch forces with artillery.

The defeated Dutch governor Eustachius De Lannoy was so impressed that he took up service with Travancore and modernized the Travancore Army (which, till then, had been armed mainly with melee weapons) into an effective fighting force. De Lennoy modernized the existing firearms and introduced better artillery and, more importantly, trained the Travancore army in the European style of military drill and military tactics. He carried out his orders with such sincerity and devotion that he rapidly rose through the ranks, eventually becoming the "Valia Kapitaan" (Commander in Chief) of the Travancore military and served in this position until his death.

The Travancore military that De Lannoy was instrumental in modernizing, went on to conquer more than half of the modern state of Kerala, and the Nedumkotta forts De Lannoy had designed, held up the advance of Tipu Sultan's French trained army during the Third Anglo-Mysore War in 1791 AD till the British East India Company joined the war in support of Travancore.

Legend has it that settlers moved into the fertile Indian lands from the north. In the process, they pushed the native people southwards. The southern part of India became excessively crowded and reached a state when there was practically no place to stay. A few families rushed to Lord Parashurama and narrated to him their woes. He agreed to help and went with them to south India.

He saw that the land was indeed very crowded and prayed to Lord Varuna (the God of the sea) to give up some land from under the sea. The arrogant Varuna flatly denied and raged even more ferociously. Lord Parashurama, known for his quick temper, is said to have thrown his axe into the sea and pulled up a huge chunk of land. Thus Kerala was born. The people were very happy and moved in to the new land that Parashurama blessed them with and Parashurama went back to his abode.

Sometime later, the people came back wailing to Parashurama yet again. They complained that the land given to them was infested with snakes and had poisoned yellow soil and no crops would grow on it. Even the rivers were heavily poisoned and their cattle died in hundreds everyday. Parashurama decided to pay a visit to Vasuki, the king of snakes.

Vasuki welcomed him to his underworld kingdom with all due honour. Once seated, Parashurama asked him the reason why his subjects taunted the poor people who lived on the new land. Vasuki replied quite calmly that the piece of land that Parashurama had ploughed out was a piece of his kingdom and that it was the home of his subjects. How could he, being a righteous ruler, ask them to move out of their homes?

After a long discussion, they reached a mutual decision. Parashurama told Vasuki that if he ordered his subjects to remove the poison from the land, he would see to it that he and his subjects were always revered and provided for by the people of the land. Should they fail to do so, Vasuki was free to order his subjects to punish them. However, they should leave the land alone. This proposition was acceptable to Vasuki and orders were immediately given to remove all poison from the land.

When Parashurama went back, he called forth the heads of sixty-five aristocratic families, imparted to them the ritualistic methods of doing Naga puja, and ordered them to have a shrine for the Nagas in each of their homes. This was duly done and all poison was withdrawn from the land. Kerala became one of the most fertile areas in the world. Crops thrived and people became very wealthy.

what an informative article! thanks!... :)

My father's community, Devadiggas of Mangalore, also gave the matrilineal system. There's not much more information though, that we know about them.

Comprehensive insight on Matrilineal Society of Meghalaya and Kerala. Thanks.

They are not clans: Khasis are tribals and Nairs are a dominant caste of Kerala.

Wow. Had no idea of how brutal this Tipu Sultan was

I had known about it but not in such details.. Treasure of Information...nk

Recommended reading by those who have an interest in social anthropology of Nairs. Good information for every one.

Very informative post about the history of nairs.But this is entirely history now!

What an insight. Truly appreciate the sharing of the post.

Although I knew about the matrilineal system of inheritance with a woman as head of Nair's and Khasi communities but never knew so much in detail .Nair's as per my reading are said to be descndent of Nagas which is substantiated here with story of Parasuram in this post which also I had read long back .Mind bogging information contained in this post .Great . Govt has now recognised that mother is equally important as father and she therefore must get recognition .Star plus has started a campaign recognising a person from his mother's name .Hope it catches up soon .

What about the Thiyyas of North Malabar ??