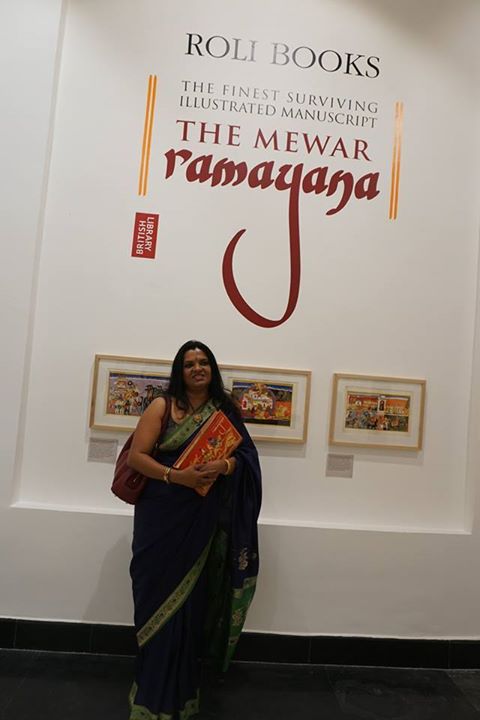 Welcome to one of the world's most beautiful Ramayana manuscripts. The original was prepared for Maharana Jagat Singh, the ruler of the Rajput kingdom of Mewar in Rajasthan, in the middle of the seventeenth century.

Most volumes of the manuscript are now in the British Library. They were presented by Maharana Bhim Singh of Mewar to Colonel James Tod who brought them back to Britain in 1823. Other parts have remained in India, held today in three separate institutions and one private collection.

Digitisation has made it possible for this long-divided manuscript to be brought together again for the first time in almost 200 years. The majority of text pages in the manuscript have been digitised as well as the paintings so that Valmiki’s work can be read in the original Sanskrit.

The Ramayana – “Rama’s journey” - is one of India’s oldest stories. It was first told in the Sanskrit epic poem of Valmiki some two and a half thousand years ago. Since then it has been retold over and over in different forms in many languages of India and beyond.

The many manuscripts of the Ramayana that survive also bear witness to the work’s widespread popularity. Over 2,000 are known, dating from the eleventh century onwards.

Illustrated copies were prepared at various royal courts, particularly in Rajasthan and the Punjab Hills. But very few of these have survived in anything approaching complete form – generally only isolated paintings are found. Curiously, the earliest surviving illustrated Ramayana was made not for a Hindu patron but for the Mughal Emperor Akbar in 1588, with 176 paintings.

The Mewar Ramayana, also know as the Jagat Singh Ramayana, is the finest copy of the work ever commissioned by a Hindu ruler. The story held a special significance for the Mewar ruling family, as the Sisodiya Rajputs counted Rama among their direct ancestors in the Solar Dynasty. The care – and expense – lavished upon the manuscript demonstrates that its preparation was a great act of family devotion.

This manuscript is also the most heavily illustrated Ramayana known, originally containing perhaps as many as 450 paintings. The large format of each individual painting is also remarkable. This was one of the greatest manuscript projects ever undertaken in India and required close collaboration between teams of painters, although a single scribe copied the text. Little wonder that the manuscript took five years to complete, from 1649 to 1653.

Pramod Kapoor of Roli Books persisted for five years to create a volume from across the various collections of the more than 400 paintings that tell the whole visual narrative of the Ramayana through the view and atelier of a Hindu Rajput King , a Sisodia , who refused to bow even to Akbar .

The vital colours and the visuals are available for view in the Bikaner House , by itself now becoming a space for all kinds of literary events , giving them an Indian Royal grandeur that none of the sterile functional corporate or institutional spaces can ever give . Its scale of construction and Rajput-Mughal elements mixed with British architectural influences and the redone space with wall and roof painting in Rajput style and the huge paintings of Srinathji give an energy unlike any other in Lutyens Delhi.

You can go experience the exhibition from today the 26th October to 13th November , with 30th October and 1st November closed for Deepawali and Bhai Dooj .

I was there for the book release on the 25th evening , and it was a New Delhi opening in all its style and pizazz , but pure vegetarian snacks of palak pakoda chaat , aalu tikki , gol gappas ! You can see few photos below , with candles welcoming you to the Bikaner House galleries .

On stage were besides the authors JP Losty and Sumedha Verma Ojha , were Maharana Arvind Singh Mewar who is the 76th custodian of the Mewar Dynasty based now in Udaipur .The Maharanas are considered not rulers but custodians of the kingdom on behalf of Sri Eklingji (Lord Shiva). And the Guest of Honour was Amitabh Kant the CEO of NITI Aayog and the brand Guru bureaucrat of Incredible India , Athithi Devo Bhava , Make in India and Start-Up India .

From Shashi Tharoor to Malvika Singh , publisher of Seminar were there along with many faces of the Old Lutyens cultural, intellectual and social elites , and handloom sarees and almost wedding like dresses were in full display , making it seem very festive and desi , almost as Maharana Arvind Singh said , welcoming back Rama , just on Diwali , in Ayodhya .

New Delhi is the Ayodhya today of India , and this Ramayana of Mewar being published in such a scale for the first time ever , from an Indian publisher is a feat to be celebrated .

The merchandise from jhola bags to coasters to postcards to trays to prints from the collection are all at sale .

Sumedha spoke about the eternal essentiality of Ramayana as the Indic cultural social palimpsest , through which thousands of Ramayanas have been retold , but all based on their source story , the Sanskrit Valmiki Ramayan , which she has simply translated and retold with the artworks .

Amitabh Kant was all praise for Pramod Kapoor as being the publisher who can manage Indian bureaucracy like none other Indian publisher .

The presentation , the quality of the event and the book is top class . Almost Regal .

Well Rama was a King and as a homecoming back into the gardens and palaces of Lutyens Delhi , he deserves such a celebration .

"Written by Valmiki, a dacoit-turned-sage who lived at the same time as Ram himself, Ramayana follows the path of Ram. From his birth, valorous deeds, winning of the hand of Seeta in marriage, exile and suffering from Ayodhya, battle with Ravan to his final triumphant return to his kingdom as the slayer of the demon of Lanka, this epic is a guide to navigating the complex pathways of life through the inspiration of paramatma taking an avatar to mingle with earthly beings and share their joys, sorrows and challenges.

Beautifully illustrated with paintings from the Mewar Ramayana prepared for Rana Jagat Singh of Mewar (reg. 1628 52), this is the first time that paintings from different locations have been put together in one volume. In the hands of mid-seventeenth century artists the story of Ram has been turned artistically into a sophisticated expression of Rajput ideals and society."

Very Very Intersting !! Would love to Hv one of this rate book of Ramayan.. How do I order it Or purchase it Is it available in Mumbai??

Interesting thanks, this is really great. More please !!!