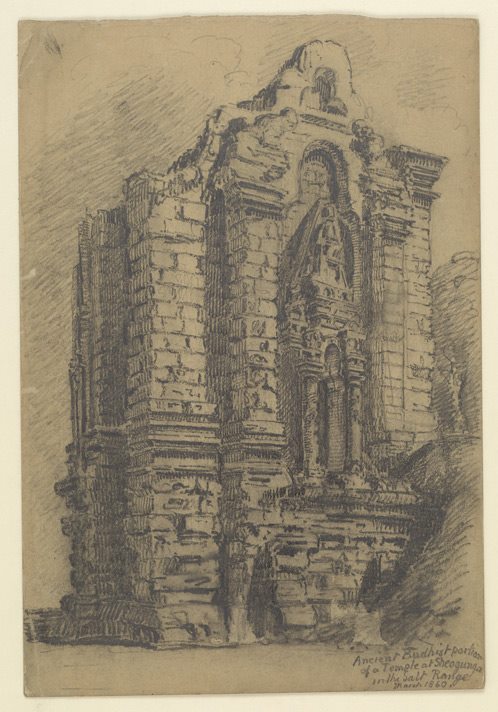 Temple at Shivganga in the Salt Range of the Punjab, now in Pakistan - 1860

Sir Henry Yule (1820-1889) served with the Bengal Engineers in India from 1840 to 1862. From 1845 to 1849 he worked in the North West Provinces restoring and developing the old Mughal irrigation system. Work on this project was interrupted by the First and Second Anglo-Sikh Wars (1845-6 and 1848-9) in which he participated. Sir Henry Yule is remembered for his work on the 'Hobson-Jobson' (London, 1886), a glossary of Anglo-Indian colloquial words and phrases, as well as other works on the history and geography of Asia. The Salt Range consists of a range hills and low mountains situated in the valleys between the Indus and Jhelum rivers. They are made of rock salt from one of the richest salt fields in the world. The temple pictured here is one of many that is situated along the salt range.

Image and Text credit:
Copyright © The British Library Board

What could have been idea of erecting these fine looking and architecturally different shrines in this part or Salt range/route? Isn't it called Potohar plataeu? It could have been probably a part of the complex en route that held and to and fro traffic of salt traders from deeper India i.e. western to Central India and patronized by Caravan people or Banzaras in those times. The Salt Range in Suleman is on the border of Sialkot and Gujarat districts (now in Pakistan) and the salt mines were developed by Mughals but known from ancient times.

May be this one ( http://pakgeotagging.blogspot.in/2014/05/hindu-temple-at-amb-amb-is-small.html )

Great! thanks a lot. I really love it