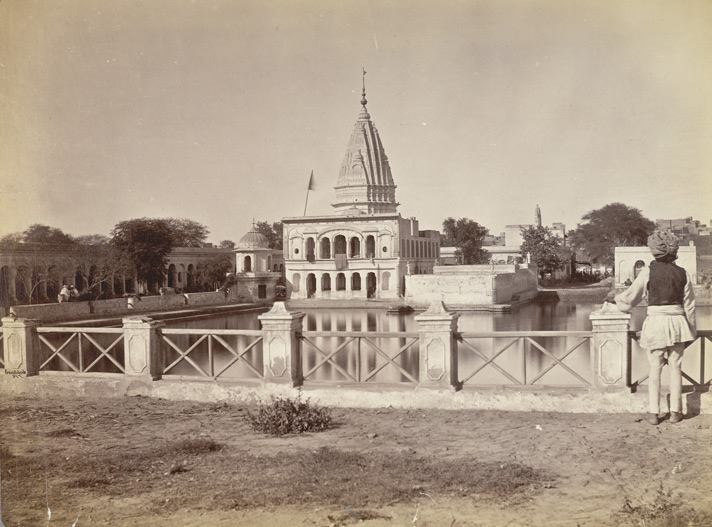 Photograph of the temple of Rattan Chand at Lahore, Pakistan, taken by George Craddock in the 1880s, part of the Bellew Collection of Architectural Views. Lahore, the capital of Punjab province, is considered the cultural centre of Pakistan. Islam came here after the advent of Mahmud of Ghazni in 1021 AD, and it was subsequently ruled by a succession of dynasties of the Delhi Sultanate, followed by the Mughals, the Sikhs and the British. It reached its apogee under the Mughals, known as the Garden City and with enough architecture to rank it with other great Mughal centres like Delhi, Agra and Fatehpur Sikri. Lahore suffered with the decline of the Mughal empire in the 18th century, frequently coming under attack. It was finally taken by the Sikhs, who under their leader Ranjit Singh (ruled 1799-1839), were masters of the Punjab region by 1818. During Ranjit Singh's rule in Lahore, he became fond of a small boy at his court who grew to serve him with distinction. This courtier, Lala Rattan Chand, was awarded a prime plot of land by the Sikh ruler where he erected a temple to Shiva. Rattan Chand prospered even with the change of power to the British in Lahore from 1849. Joining the British administration, he was able to develop the area around the temple with gardens filled with fruit trees and a huge tank or reservoir, making it a well-known feature of the city. Rattan Chand died in 1872. The temple and its gardens were irretrievably damaged in the riots which followed the partition of India in 1947.

Image and Text credit:
Copyright © The British Library Board

" Today, there lie hundreds of small high houses, the dusty Bansaanwala Bazaar and the road now has three names, just one of the is Rattan Chand Road." — Majid Sheikh, The Dawn ( http://www.dawn.com/news/1064969 )