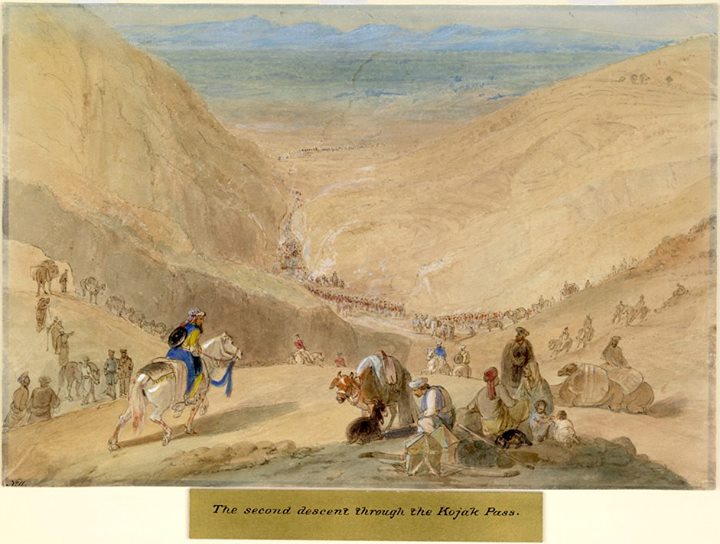 Image:
Water-colour view of the second descent from the Khojak Pass (Baluchistan) by James Atkinson (1780-1852) between 1839 and 1840. This is plate 12 from the album 'Sketches in Afghaunistan'. Inscribed on the mount is: 'The second descent through Kojak Pass.'

This drawing was made during the first Anglo-Afghan war of 1839-42, when Atkinson served as the official Superintending Surgeon of the Army of the Indus, a combined force of British and Indian troops that marched on Kabul in 1839. On route to Afghanistan they passed through the Khojak Pass which is five miles long and 5,757 feet tall at its highest point. The descent into the pass was done in three stages and Atkinson presents us with a spectacular view of each. He writes that this second descent was just as perilous as the first, "threatening equal destruction among the camels, and it was not long before these fears were painfully realized by a great number of the camels falling head-long into the ravines, being unable, from the soft and loose state of the earth, to obtain any secure footing. The column and innumerable camp followers, here took three different routes, and encamped near the bottom of the hills, about two miles distant from the plain of Chumum, where the First Brigade had already encamped."

no thanks is enough for your dedication.... only love for your work.