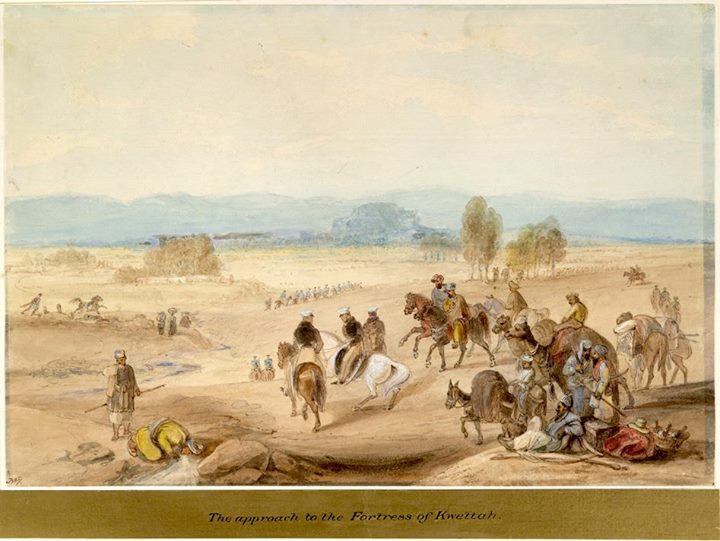 Digital Rare Book:
Across the Border or Pathan and Biloch
By Edward Emerson Oliver
Published by Chapman and Hall, London - 1890

Image:
Water-colour view of the approach to Quetta (Baluchistan) by James Atkinson (1780-1852) between 1839 and 1840. This is plate 8 from the album 'Sketches in Afghaunistan'. Inscribed on the mount is: 'The approach to the Fortress of Kwettah.'

This sketch was made during the first Anglo-Afghan war of 1839-42 when Atkinson served as the official Superintending Surgeon of the Army of the Indus, a combined force of British and Indian troops. After struggling through the Bolan Pass, the army under Sir John Keane reached the plains near the town of Quetta, capital of the province of Baluchistan, in modern-day Pakistan. Mismanagement of supplies meant that the troops and followers were nearly in a state of mutiny over food. Atkinson wrote: "Here the state of the Army, for want of supply of grain and ollah became alarming, and although at this place abundant supplies had been promised and expected, it became necessary for the chief military authority, Sir Willoughby Cotton, to reduce the daily rations to one-half, which scanty allowance was continued for nearly three months." Lord Keane and his staff are portrayed in the foreground.