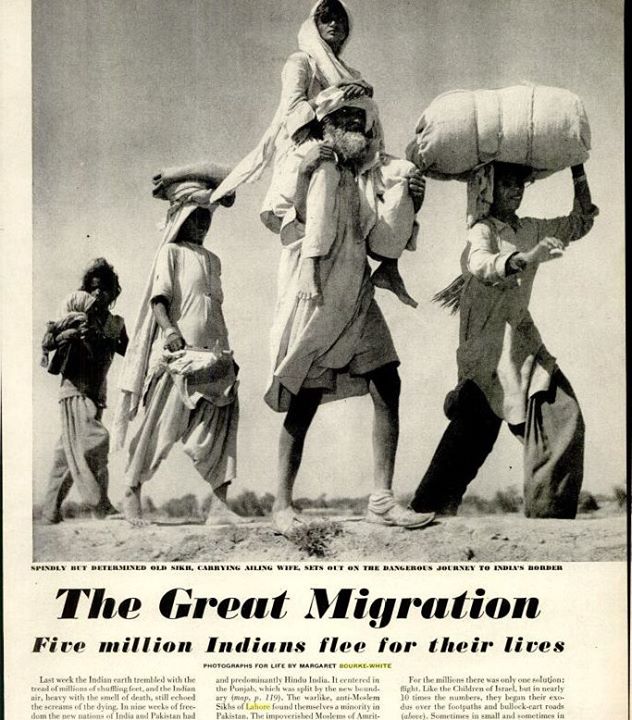 Digital Rare Book:
Divide and Quit : An eye witness account of the Partition of India
By Penderel Moon
Published by Chatto and Windus, London - 1961

"This is a classic first-hand account one of the most cataclysmic events of the century, the Partition of India. The author, a member of the ICS posted at Bahawalpur, offers an analysis of the Partition, describing the manifestations of communal frenzy, the efforts made to stem the terror, and the breakdown of government."

RE: ' Divide & Quit ' Many years after the events of 1947, Earl Mountbatten was asked during an interview for his reflections on the period, and he replied, simply : "I [ messed] it up." He actually used a much stronger word than that, but I won't repeat it here.... As we all know -- there are always different ways of viewing and interpreting any particular passage of history. But in my opinion (and it is just an opinion) and with all due respect to various patriotic sensibilities, the division ( or the ‘ Balkanisation’ if you prefer) of British India into a number of micro-states at Independence would not have been any great disaster -- rather than sanctioning the creation of the two monolithic, unwieldy, confrontational and artificially homogenous MACRO-states … Leaving such speculations aside -- the realities of the manner in which the British authorities (both at Westminster and in Delhi) transferred power and sovereignty to India & Pakistan in 1947 was, undoubtedly, something of a rushed job – an irresponsible scuttle really … and the process should have been much more carefully conducted -- regardless of the immediate political pressures. Independence could have unfolded over the course of two or three years, rather than in a matter of months --- a timeframe that only served to exacerbate tensions, all but negated the possibility of a relatively smooth transition, and allowed no room for further negotiations to take place. I cannot believe that if the British government had announced India's imminent independence (as it did in the March of 1947) , to be granted on , let us say for the sake of argument, the 1st January 1950 (instead of June 1948, subsequently and hastily revised by Mountbatten to August 1947) --- and that the interim period would witness intensive, concerted diplomatic activity between all parties concerned --- conferences, negotiations, referenda and so on --- concerning the constitutional future of the sub-continent -- that the outcome could only have been considerably less calamitous and bloody than was, in fact, actually the case. It is estimated that up to one million people died in the communal violence that erupted in the immediate aftermath of partition -- with millions more displaced and reduced to refugee status -- India and Pakistan would be at war by the October of 1947 over Kashmir ... and how such an outcome can be ' spun ' as anything other than an absolute catastrophe is quite beyond me. It was a very complex situation -- no doubt about that -- but Britain had an obligation to manage the outcome far more effectively than she did in the end. There is another famous quote ( I can't now remember who first said it ) that : " ... the British found India in chaos, and they left her in chaos too. " ... quite !

Water-colour artist, April Swayne-Thomas & her architect husband,Geoffrey were friends of Jinnah & based in Sind, during the partition & a few years after. Her book - " Indian Summer" - has a few personal insights too. Not a history book though. ( http://www.kentlive.news/sweating-hard-final-days-raj/story-16529951-detail/story.html#1 )

"The tragically great uprooting" is how I see it...

link ain't working for the pdf

This the book, Ahuja. Take a look.

what's the great about the partition ?