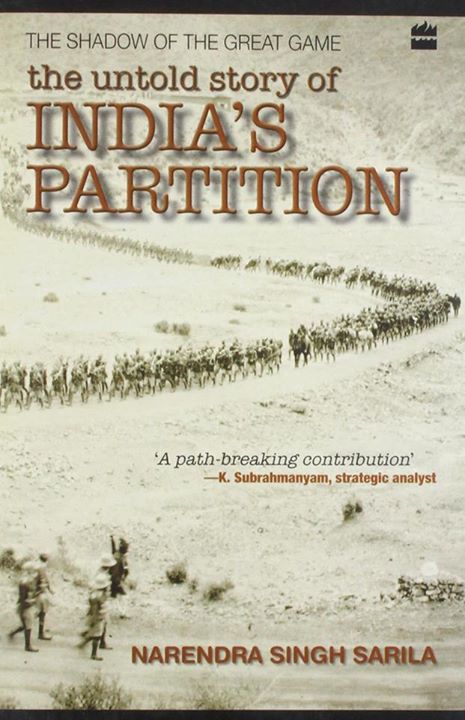 New Book:
The Shadow of the Great Game: The Untold Story of India's Partition
By Narendra Singh Sarila
Published by Harper Collins - 2009

The Shadow of The Great Game: The Untold Story of India's Partition provides a different perspective on the actual cause of the partition in India. The author was an ADC to Lord Mountbatten and he had unique insights into the mindsets of the personalities involved in the events leading up to India's independence and partition.

Using his personal knowledge as well as documented evidence, the author asserts that Britain insisted on the partition of India, mainly because of its fears over Soviet expansion into the region. This was a long-standing rivalry, involving the imperialistic ambitions of both Russia and Britain in the south Asian region. This rivalry was referred to as the Great Game.

The book continues to tell readers that after the Second World War, Britain feared losing control over the vast oil reservoirs in the Middle East. They felt that they needed a base in the Indian neighborhood, to prevent the Soviet Union from gaining a foothold in this region. The Shadow of The Great Game: The Untold Story of India's Partition also details the clash between Roosevelt and Churchill over the idea of dividing India.

The author has used various documentary evidence like the correspondence between political leaders in Britain and the Indian Viceroys like Wavell, Lilingthow and Mountbatten to support his assertions.

The book provides sketches of the personalities of the British and Indian political leaders of the time.

Book Review: The ill-fated battle for Indian independence By Jad Adams The partition of India was one of the great humanitarian disasters of the 20th century, the massacre of perhaps half a million people, a number that seems all the more terrible because it had been preceded by a liberation campaign that stressed non-violence, and it followed a peaceful transfer of authority by the British. Narendra Singh Sarila, a former ADC to Lord Mountbatten and a senior Indian civil servant of penetrating intelligence, shines a light on the diplomatic world of hints, pressures and concealed motives on the route to partition that he has uncovered through painstaking research in archives in the USA and Britain. A refreshing number of his sources have the feel of the recently released or long-hidden about them. This story has been told as a tale of heroes (Nehru and Gandhi) and villains (Jinnah and Churchill), but Sarila presents it as a series of blunders: by Nehru and the Congress Party, mainly, for relinquishing their political control over the majority of the country in a petulant refusal to join with the British in the war effort in 1939; and for their rejection of the British offer of eventual self-government in 1942. Every retreat they made was an advance for Jinnah and the Muslim League, which at the start of the war did not represent even a quarter of Muslim voters yet was able to demand the partition of the nation on religious lines at the end of it. Sarila charges Congress leaders, some of whom he knew personally, with 'arrogance', 'inconsistency,' 'poor political judgement' and a fatal lack of interest in foreign affairs and defence. These are tough words, but they needed to be said by someone who has India's interests at heart. Read more: http://bit.ly/2dQ75R4

An excellent read.specialy role of britishers in dividing india..they had their interests in mind .it was all to counter Russians in west Asia and they found a great friend in Jinnah Saheb who readly agreed to give them place if needed against Russians where as Sardar Patel refused for such facility in independent india

Cover comment by Defence analyst, late K Subrahmanyam, whose son, Dr S Jaishanker is India's foreign secretary now. As Ambassador TP Sreenivasan put it - 'S Jaishankar turned out to be a chip of the old block and that too, in modern parlance, a fully loaded chip. The father laid down the precepts of Indian strategy and diplomacy and the son put them into practice.'

Great book. Must read. Tells us about how the Gilgit scouts CO who was a Britisher along with another one took a false oath of allegiance to the king of Kashmir, by replacing the holy Gita with a pocket sized Oxford dictionary and then informed the Pakistani army about the situation in Kashmir in the winter of 1948. Everybody should know, that this was a well orchestrated event with UK playing a blind eye and the blunders committed by Nehru in the aftermath, going to UN with the blind faith on Mountbatten.