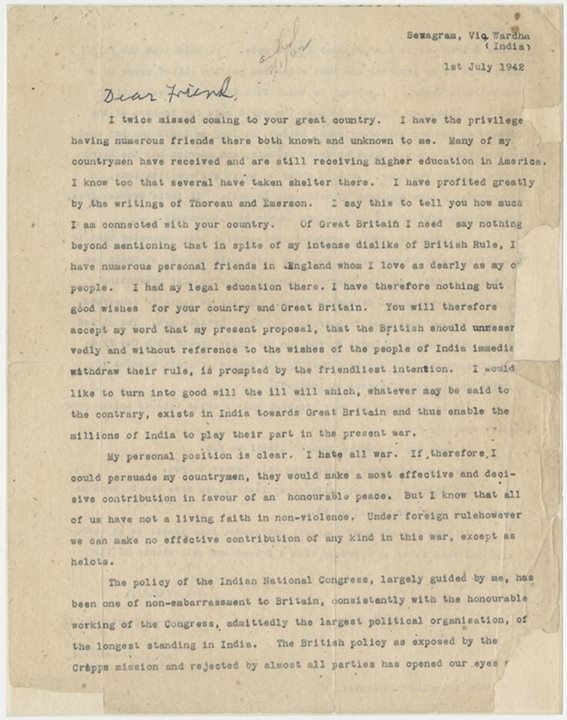 In July, 1942, Mahatma Gandhi wrote this letter to Franklin Roosevelt to state his position on Indian independence and involvement in World War II. Offering respect for the people of the United States and of Britain, Gandhi nonetheless told the President that India must be free, if the principles that the Allies were fighting for were true ones: “The full acceptance of my proposal and that alone can put the Allied cause on an unassailable basis.”

The Gandhi letter, conveyed to FDR by journalist and future Gandhi biographer Louis Fischer, arrived as negotiations over a possible shift to self-government proceeded in India. British diplomat Sir Richard Stafford Cripps had visited earlier in 1942, promising independence after the war in exchange for cooperation and service to the Allies while hostilities continued. The Indian National Congress rejected the proposal, and the negotiations collapsed. The month after sending this letter, Gandhi was to launch the nonviolent "Quit India" movement, for which he was to be jailed for most of the remainder of the war.

Within the limits of diplomacy, Roosevelt tried to urge Churchill to cede ground to the nationalists. Historian Auriol Weigold writes that the prime minister worried that American sympathies might shift to the Indian cause, and therefore orchestrated a publicity campaign to convince American public opinion that independence might have a negative effect on the Allied war effort.

In the end, over two and a half million Indian citizens, still under British governance, served in the Allied forces during the war. Independence, negotiated in earnest beginning in 1945, finally came in 1947.

You say this communication to the US president is a 'whimsical letter' yet you also claim the support of the USA five years later was one of the two main determining factors in enabling the independence of India. I think you perhaps don't realize how much individual people and people with visions can and do change the track of history.

Gandhiji's intentions were good, but the issues raised herein by the great soul should be seen in their proper context, in the context of the war-time geopolitics and India's subsequent partition. The Yanks under Roosevelt were in favour of Indian independence. However, such posture was guided by their desire to contain Japanese influence in India and, more importantly, by the desire to secure Republican China from any form of Japanese aggression, including aggression from the south/southeast. Gandhiji's emphasis on non-violence and non-cooperation in this instance was eventually interpreted as omission of duty, thereby giving the ultra-conservatives among the British politicians a chance to partition India as a punishing measure. The truth is despite Mahatma's public outcry, India's material help was instrumental in securing the Allied victory. But in the post-War era, the Brits gave the reward to a bunch of selected criminals, who gathered under the banner of the Muslim League and whose descendants, with the passage of time, have now become sorts of 'Trojan horses' for the Albion.

The ' Great Mahatma ' wrote several such whimsical letters to various world leaders during this period ( circa early 1940s) --- most of which probably ended up in a waste paper basket ... These, famously, included the missive that the earnest Mr Gandhi sent off to Adolf Hitler --- in which he suggested that the Fuhrer, as a ' Dear Friend ' --- should seek to settle his differences in Europe via ' non-violent ' means -- a letter which continues to cause hilarity in European diplomatic circles 70 years later ... The truth of the matter was considerably darker - for example : When the Earl of Halifax ( as Foreign secretary , and the former Viceroy) visited Hitler at Munich in 1938 - ostensibly to discuss peace - he was told, in no uncertain terms, that the British could and < should > settle their problems in India by having the naïve Mr Gandhi EXECUTED immediately --- along with any other dissenting senior Congressmen while they were at it !!! ----- Anyway ... It is important to understand that Indian Independence arrived in 1947 only < partially > as a result of the indigenous ' freedom ' movement ... and that two MUCH bigger factors were also in play - i.e : (1) Pressure from an economically strong and ' anti-colonial ' USA on an exhausted UK --- immediately post-war --- when the latter was heavily in debt financially to the former ... (2) The election , in 1945, of a socialist government in Britain , the leaders of which had been committed to Indian Independence since the 1920s ....

RE: " The Yanks under Roosevelt were in favour of Indian independence. " ( from Tridib Debgupta, below). Yes -- there is certainly some truth in this comment -- the Americans < did > offer support to ' nationalist ' Independence movements in the 1940s ( tacitly, at least, rather than directly ) because the aims of these movements often chimed with their own ' anti-colonial ' sentiments and political ideology. However, they started to change their tune on this matter from the 1950s onwards, when it began to become apparent that the removal of European colonial governments could lead to the imposition of Communist or Soviet-backed regimes throughout large swathes of Asia and Africa ( hence, for example, the heavy U.S. support for the French war in Indo-China). As for your further remarks -- viz : " India's material help was instrumental in securing the Allied victory [but ] in the post-War era, the Brits gave the reward to a bunch of selected criminals " ... I think that most people would agree with the first half of your sentence (a statement of fact), if not necessarily with the second (a statement of opinion) ...