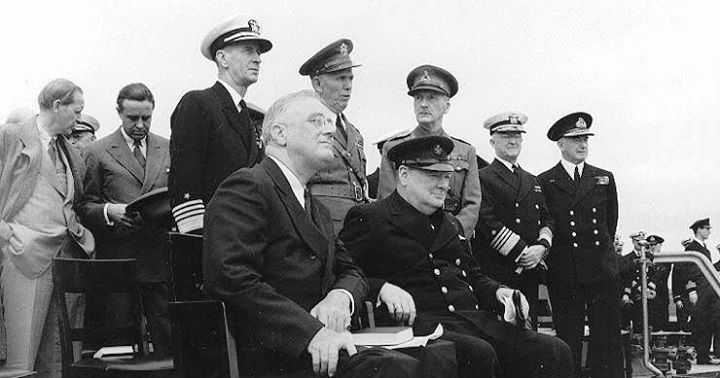 Book Extract:
As He Saw It
By Elliot Roosevelt
With a foreword by Eleanor Roosevelt
Published by Duell, Sloan and Pearce - 1946

The reasons behind India's Independence...we were not aware of.

Roosevelt vs. Churchill · Excerpts from "As He Saw It"

The following eyewitness account of the struggle between President Franklin D. Roosevelt and Sir Winston Churchill, during negotiations for the Atlantic Charter at the naval base of Argentia in Newfoundland in March 1941, is taken from the book As He Saw It, by Elliott Roosevelt (New York: Duell, Sloan and Pearce, 1946). Elliott Roosevelt, FDR’s son, was his aide at all but one of the Big Three conferences during World War II. A continuous theme throughout the book, is the clash between the two leaders on the issue of Britain’s colonies, as FDR fought for his vision of a postwar world without empire. The following are two short excerpts.

It must be remembered that at this time Churchill was the war leader, Father only the president of a state which had indicated its sympathies in a tangible fashion. Thus, Churchill still arrogated the conversational lead, still dominated the after-dinner hours. But the difference was beginning to be felt.

And it was evidenced first, sharply, over Empire.

“Of course,” he remarked, with a sly sort of assurance, “of course, after the war, one of the preconditions of any lasting peace will have to be the greatest possible freedom of trade.”

He paused. The P.M.’s head was lowered; he was watching Father steadily, from under one eyebrow.

Churchill shifted in his armchair. “The British Empire trade agreements” he began heavily, “are—”

Father broke in. “Yes. Those Empire trade agreements are a case in point. It’s because of them that the people of India and Africa, of all the colonial Near East and Far East, are still as backward as they are.”

Churchill’s neck reddened and he crouched forward. “Mr. President, England does not propose for a moment to lose its favored position among the British Dominions. The trade that has made England great shall continue, and under conditions prescribed by England’s ministers.”

“You see,” said Father slowly, “it is along in here somewhere that there is likely to be some disagreement between you, Winston, and me.

“I am firmly of the belief that if we are to arrive at a stable peace it must involve the development of backward countries. Backward peoples. How can this be done? It can’t be done, obviously, by eighteenth-century methods. Now—”

“Whichever of your ministers recommends a policy which takes wealth in raw materials out of a colonial country, but which returns nothing to the people of that country in consideration. Twentieth-century methods involve bringing industry to these colonies. Twentieth-century methods include increasing the wealth of a people by increasing their standard of living, by educating them, by bringing them sanitation — by making sure that they get a return for the raw wealth of their community.”

Around the room, all of us were leaning forward attentively. Hopkins was grinning. Commander Thompson, Churchill’s aide, was looking glum and alarmed. The P.M. himself was beginning to look apoplectic.

“You mentioned India,” he growled.

“Yes. I can’t believe that we can fight a war against fascist slavery, and at the same time not work to free people all over the world from a backward colonial policy.”

“What about the Philippines?”

“I’m glad you mentioned them. They get their independence, you know, in 1946. And they've gotten modern sanitation, modern education; their rate of illiteracy has gone steadily down. . . .”

“There can be no tampering with the Empire’s economic agreements.”

“They’re the foundation of our greatness.”

“The peace,” said Father firmly, “cannot include any continued despotism. The structure of the peace demands and will get equality of peoples. Equality of peoples involves the utmost freedom of competitive trade. Will anyone suggest that Germany’s attempt to dominate trade in central Europe was not a major contributing factor to war?”

It was an argument that could have no resolution between these two men. . . .

The conversation resumed the following evening:

Gradually, very gradually, and very quietly, the mantle of leadership was slipping from British shoulders to American. We saw it when, late in the evening, there came one flash of the argument that had held us hushed the night before. In a sense, it was to be the valedictory of Churchill’s outspoken Toryism, as far as Father was concerned. Churchill had got up to walk about the room. Talking, gesticulating, at length he paused in front of Father, was silent for a moment, looking at him, and then brandished a stubby forefinger under Father’s nose.

Or would have been, if Father had lived.

The history of the second War is fraught with misunderstanding. FD Roosevelt, as a follow up on Allies growing mastery over North Africa battles, desired a massive invasion of North France. However, Churchill held onto his view, which now appears to be deluded, of an all-out attack on the Third Reich’s “soft underbelly” preferred Mediterranean-Aegean-Balkan strategy. This strategic disagreements between FDR and Churchill almost led to the Allies losing – or rather failing to win – the war in Europe. This disagreement would simmer for months and at times become surprisingly heated. Not only at that time, between the two great Allies, but in subsequent historiography. Tillrecently, we had heard one side of the story. WC in his epic memoirs, appeared to clarify the course of the conflict, after he lost the PM seat in 1945, and with it, his magisterial prose. But in truth Churchill only muddied already muddied waters. As early as 1943, he boasted that once hostilities had ceased he’d “bury” his mistakes. On the other hand, FDR’s war perspective were lost as he died weeks before the D Day and as a result, his version of events never became a case of serious study. American historians have accused Churchill of bamboozling Roosevelt with his Mediterranean strategy whereas the British pundits,argued that Churchill was rightly put off by the high casualties that a premature D-Day would entail and hoped to delay the Cross-Channel undertaking until it was guaranteed success. Thanks to postwar security concerns, many of FDR’s papers were kept secret. Meanwhile, the numerous accounts of the war that were written by American generals and their biographers inevitably minimize Roosevelt’s role in directing the war. In this period, WC’s account of War, not only fetched him the Nobel for Lit., but came to be seen as gospel. Yet, in reality it was Roosevelt who saved the war from being lost by Churchill’s complete misunderstanding of Hitler and the Wehrmacht. Tragically, at no point in 1943 did Churchill realise his mistake and continued opposing theFDR. Churchill began a series of deceits and manoeuvres, which many have termed as worthy of a Shakespearean villain. He travelled more than once to North America by the liner, 'The Queen Mary', to try and persuade the President to abandon the D-Day. The US President was livid and warned the British PM that if he continued to undermine the D-Day operation, America would shut GB out of the Manhattan Project, Washington’s top secret atom bomb program. FDR was so incensed, he insisted that the D-Day invasion would no longer be commanded by a British officer. An American general would head up the operation – one who would make sure it would be mounted in the spring of 1944.A stunned Winston Churchill returned to Quebec having given his word to toe the line.

I love reading this excerpt over and over again. Some bhagva people need to be educated about this.