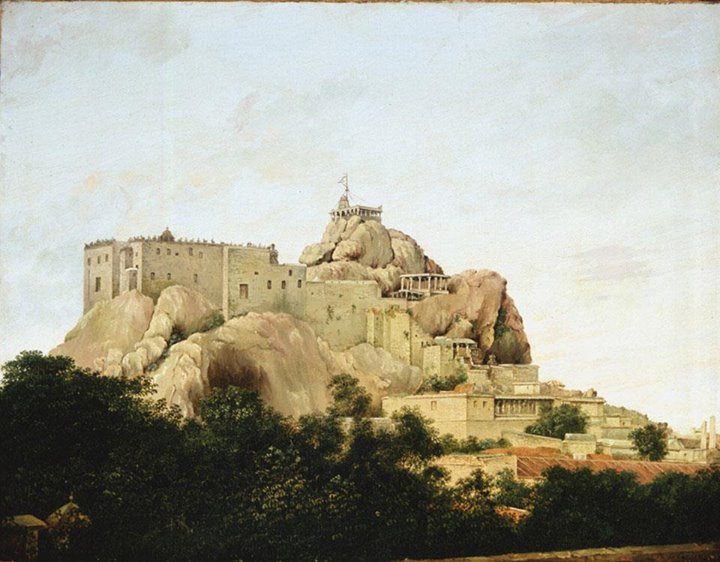 Image:
The Rock and Temple of Trichinopoly, 1801.

Strategically sited on the bank of the River Cauvery (Kaveri) in Southern India, about 56 miles (90 km) from the sea, Trichinopoly was the third most important fortified post in the Madras Presidency (after Fort St George and Fort St David). The rectangular fort was built to enclose the Rock, one of several natural outcrops of volcanic gneiss which rise abruptly from the plain.

The greater part of the fort of Trichinopoly and most of the city was built in the reign of Viswanįtha, King of Madura, from 1559. His grandson, Choka Nįyakkan, was responsible for making it the kingdom's capital. In the mid-eighteenth century the city was a frequent centre of conflict between French and British forces in the struggle to control Southern India. The city also suffered attacks during the Mysore Wars of the second half of the century, when it was devastated more than once.

Born in Jersey in 1777, the artist Philip Le Couteur entered the service of the East India Company's Madras Army in 1798. He was commissioned a lieutenant in the 12th (Madras) Native Infantry on 1 January 1800, and was captain lieutenant from 31 January 1806. He died at St Thomé in Madras on 14 October 1807.

Never heard that before... local dictionary, I presume.

can I have for Dhamapuri district sir