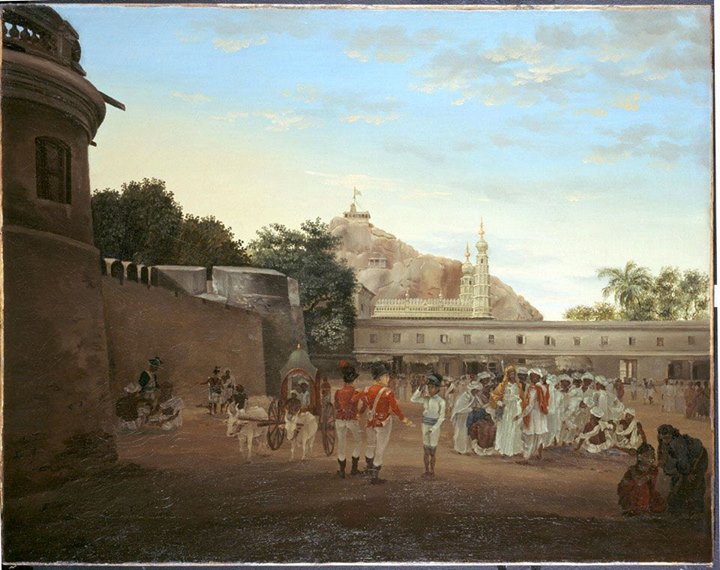 The Market Place of Trichinopoly showing officers of the Madras Light Infantry, 1800.

Trichinopoly (Tiruchchirappalli, Tamil Nadu) is situated on the bank of the River Cauvery (Kaveri) about 56 miles (90km) from the sea, south-west of Madras (Chennai). At the time this picture was painted, it was the third most important post in the Madras Presidency. This was due both to its strategic location in southern India and also because it is dominated by a well-protected fort, situated on the distinctive rock which rises steeply out of the plain to a height of about 83m. The town itself is on the plain below. In the mid-eighteenth century, it was a frequent centre of conflict between French and British forces. The town also suffered attacks during the Mysore Wars of the second half of the century, when it was devastated more than once.

Philip Le Couteur entered the service of the East India Company's Madras Army in 1798, aged 21. He was commissioned a lieutenant in the 12th (Madras) Native Infantry on 1 January 1800, and was captain lieutenant from 31 January 1806. He died at St Thomé in Madras on 14 October 1807, where his burial is registered in the name of Peter, although the signature on this painting serves to prove this incorrect.