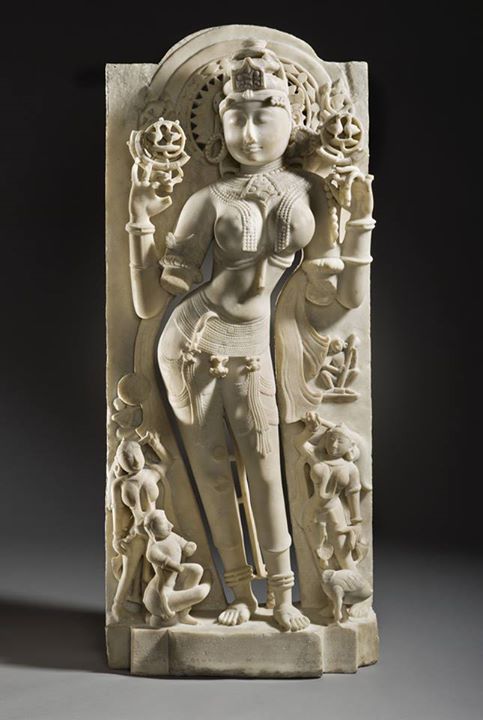 Sarasvati, the Goddess of knowledge, learning, and music, is identified in the inscription on the base of this work. It states that the nobleman Parasuruma commissioned the piece in 1156 from the master builder Jagadeva to replace one dedicated in a temple in 1069 and damaged in 1153. Such information is very rare since for most Indian sculptures the identify of the artist is not known and the works are undated. The elegant, smooth surfaces and richly carved details of this white marble figure bespeak the great prosperity of the Solanki dynasty (765-1197), when the ports of the state of Gujarat were major clearinghouses for trade between East and West. Sarasvati originally had the traditional four arms and in addition to her rosary may have held a book in one now-missing hand. The swan, her customary companion, is here a gander (lower right); facing pairs of geese also appear in the chakras, wheel-like insignias, she holds. Two small deities bearing garlands fly above them, and at either side of her hips are two more deities, one playing the vina, an ancient instrument, the other playing a flute. Below, two attendants wield fly whisks, indicating the goddess's high rank; the donor of the sculpture sits in reverence at her right foot.

Amy details on when it was transported to Los Angeles? Time line would suggest a good account of what happened to Indian history.

Beautifully carved statue. Carving in marble is unknown around 1100 AD.

It is very informative n rare .