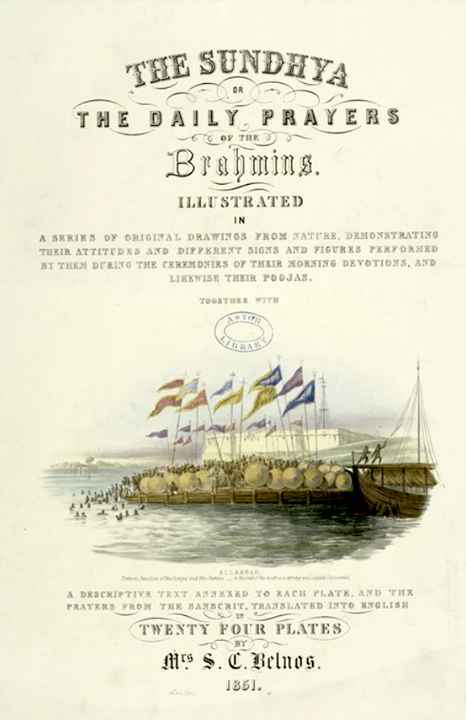 Digital Rare Book:
The Sundhya or the Daily Prayers of the Brahmins.
Illustrated in a series of original drawings from nature, demonstrating their attitudes and different signs and figures performed by them during the ceremonies of their morning devotions, and likewise their poojas.
By Mrs. Sophia Charlotte Belnos (b.1795)
Published by Day & Sons, London - 1851

Sundhya is a daily recital of prayers by Hindu Brahmins, accompanied by appropriate gesticulations. This book was written in the mid-nineteenth century and for its author, a European lady, the religious habits and manners of the native Indians must have been interesting novelties worth exploring. The prayers, at places given in the original Sanskrit, invoke various Hindu deities like Vishnu, Hanuman and Mahadeva. They come with pictorial illustrations that represent the manner of their actual performance.

Sundhya also carries information on the accessories crucial to the conduct of such prayers, like dhoodan and shunkh. The book, in S.C. Belnos's own words, intends to "communicate a correct idea of the practices.... and not to enter into the recondite subject of religion itself."

It looks over the century, the Sandhya that is done now has changed.

Wonder what'd be more interesting - rarity of the book or its contents!

Do you have this book Anna?