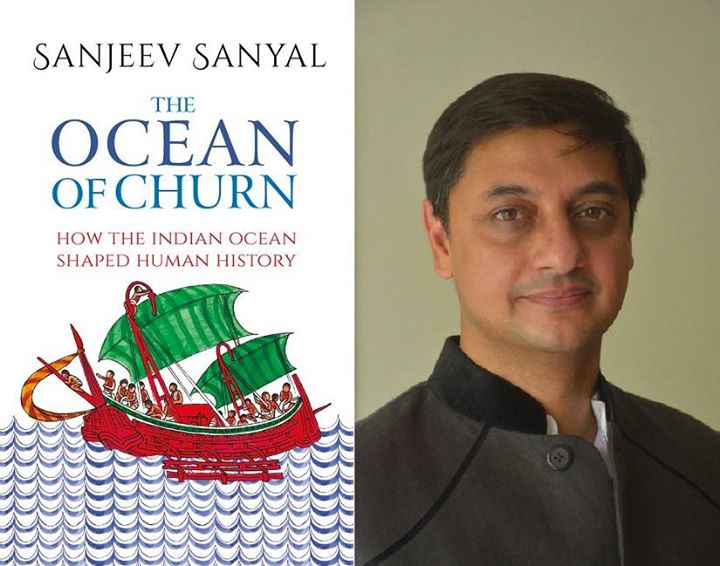 Much of human history has played itself out along the rim of the Indian Ocean. In a first-of-its-kind attempt, internationally acclaimed economist, urban theorist and bestselling author Sanjeev Sanyal tells the history of this significant region, which stretches across East Africa, the Middle East and the Indian subcontinent to South East Asia and Australia. He narrates a fascinating tale about the earliest human migrations out of Africa and the great cities of Ankor and Vijayanagar; medieval Arab empires and Chinese ‘treasure fleets’; the rivalries of European colonial powers and a new dawn. In an interview with Firstpost, Sanyal tells us how he put together this ambitious, multifaceted narrative:

Q: You’ve said much of history has been written from the point of view of battles and developments on land with not enough importance given to what happened on the high seas in the pre-colonial period. Did this contribute in your decision to write a book on the maritime history of the Indian Ocean rim?

A: Most of Indian history is written from an inland perspective — specifically the perspective of Delhi. This leaves out large parts of India from the narrative. We hear little about the ancient mariners of Odisha, the Cholas and Pallavas, the Vijayanager empire, the ports of Kerala, the links with South-East Asia and the Roman empire. This is like learning European history without Athens, Venice, Britain, Spain, Portugal and the Vikings. Not only does this inland bias ignore our rich maritime past, it also means that our understanding of the Indian Ocean rim is defined by a Western perspective. I felt that the people of this region needed to tell their own story. Only then will we understand our deep historical links with countries like Indonesia, Oman, Cambodia and so on.

Q: At various points you’ve said that oral histories should have more value placed on them by modern historians. To what extent have you relied on such oral histories to source material for your book? Have they moulded your research and/or opinions?

A: I think it is important to take into account the local memory of a historical event. This includes oral and folk traditions of various kinds — legends, songs, plays, festivals and so on. This does not mean that one should always take oral history literally or uncritically. They are often embellished and distorted. However, the same can also be said of more conventional sources such as the tales of foreign travellers. Folk memory, moreover, can often contain clues that can be followed up and confirmed from other forms of evidence. This is why, unlike mainstream historians, I do not instinctively dismiss traditional accounts as mere myths.

Q: One thing that's particularly interesting about The Ocean Of Churn is how, when dealing with the legacies of Ashoka and Tipu Sultan, you’ve depicted them in a manner different from common historical portrayals. Being objective must have been difficult; how did you draw your conclusions about them?

A: It is all about the evidence. Not just Ashoka and Tipu Sultan, but a lot of mainstream history is based on very thin evidence but it presented as if it is a well established fact. Sometimes it is about interpretation but in many cases, the available evidence points in a completely different direction. As I have pointed out, there is very little evidence that Ashoka became a pacifist or that he was a successful ruler. Similarly, there is more than adequate evidence of Tipu Sultan’s extreme brutality in Coorg and Kerala. I have tried to do the best given the available evidence. If new evidence turns up that suggests a different story, I have no problem updating my views.

I have gone through various contributions by Sanjeev Sanyal and he is simply brilliant. Yet to go through his book.

This reminds me of Braudel's pioneering work on the Mediterranean. I'm intrigued.

Really regional history should be redefined on the basis of local legends, folklore and oral narrations.It convinces.

hey guys this facebook page seems to be created to spread distorted history, culture, stories and indian civilization in the name of rare book society of india.... i have gone through this page and if you carefully observe most of the books in this page shown have been translated and distorted to the core by foreign authors & sepoys (indians psuedo intellectuals & scholars but support beaking india forces) ... AS Rajiv Malhotra BEAUTIFULLY explained very well in ALL his BOOKS ABOUT THESE DANGAROUS GUYS... these breaking india forces and so called authors and pseudo scholars who are sitting in columbia , harvard universities of comparative religions etc (ivy leagues) are all outsiders who wants to break india.... what do they mean by a rare book?? translated in western stand point of view and publish it as a rare book of india?..... rare book is book which is its original form not translate by some liftest & marxist and published in missionaries in foreign countries and culcatta... please PLEASE be aware and OPEN YOUR eyes now