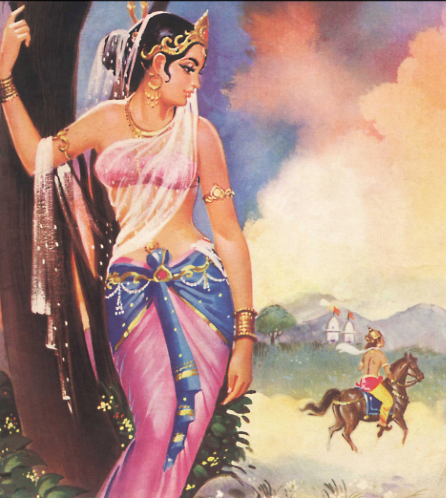 The Kadambari of Bana
And accompanied by a full abstract of the continuation of the romance by the Author's son Bhushana Bhatta
Translated by Caroline Mary Ridding
Published by Royal Asiatic Society, London - 1896

No Sanskrit poet is more interesting, original, or greater than Bana. His prose poem Princess Kadámbari is his supreme achievement. His patron, King Harsha, ruled much of northern India from 606 to 647 CE from his capital at Kannauj. Princess Kadámbari, a work of fiction set in keenly observed royal courts, has everything. A love story doubled and redoubled in rebirth, the romance was so influential that its title became the word for a novel in some modern Indian languages. In free form verse, the experimental poem embodies enormous originality. Animals, flowers and mythology, as well as humans are presented in sympathetic detail. The complex coherent structure will culminate in a breathtaking conclusion. The two love affairs that dominate the poem have not yet begun in this first volume, where we hear of rituals to obtain a son, and the upbringing of a prince. Altogether the reader is given perhaps the fullest presentation of classical India available in a single work.
(Source: The Clay Sanskrit Library)

The story of Kadambari is interesting for several reasons. It is a standard example of classical prose ; it has enjoyed a long popularity as a romance ; and it is one of the comparatively few Sanskrit works which can be assigned to a certain date, and so it can serve as a landmark in the history of Indian literature and Indian thought.

Banabhatta, its author, lived in the reign of Harshavardhana of Thanesar, the great king mentioned in many inscriptions, who extended his rule over the whole of Northern India, and from whose
reign (a.d. 606) dates the Harsha era, used in Nepal. Bana, as he tells us, both in the 'Harsha-Carita' and in the introductory verses of 'Kadambari,' was a Vatsyayana Brahman. His mother died while he was yet young, and his father's tender care of him, recorded in the Harsha-Carita, was doubtless in his memory as he recorded the
unselfish love of Vaisampayana's father in ' Kadambari.

In his youth he travelled much, and for a time came into reproach, by reason of his imsettled life ; but the experience gained in foreign lands turned his thoughts homewards, and he returned to his kin, and lived a life of quiet study in their midst. From this he was summoned to the court of King Harsha, who at first received him coldly, but afterwards attached him to his service; and Bana in the 'Harsha-Carita ' relates his own life as a prelude to that of his master.

Bana himself died, leaving 'Kadambari ' unfinished, and his son Bhushanabhatta took it up in the midst of a speech in which Kadambarl's sorrows are told, and continued the speech without a break, save for a few introductory verses in honour of his father, and in apology for his having undertaken the task, as its unfinished state was a grief to the good/ He continued the story on the same plan, and with careful, and, indeed, exaggerated, imitation of his father's style.

The story of 'Kadambari ' is a very complex one, dealing The Plot of as it does with the lives of two heroes, each Kadambari. of whom is reborn twice on earth.

Thanks for bringing these texts to life.. awesome work you guys are doing .. Is there any way I can access the original verses as well.

Enjoyed reading the introduction to kadambari ..forgotten completely ...thanks for reviving the memory of this epic .