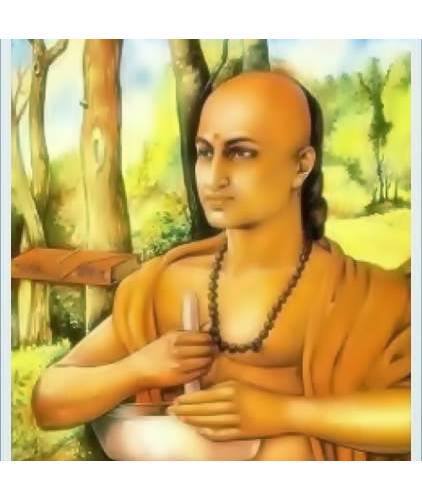 Digital Rare Book:
CHARAKASANHITA - Or the most ancient and authoritative Hindu System of Medicine
By Acharya Charaka
Edited by Pandit Jibananda Vidyasagara
Printed at The Saraswati Press, Calcutta - 1877
In Sanskrit

Charaka born c. 300 BC in a Maga Brahmin family was one of the principal contributors to the ancient art and science of Ayurveda, a system of medicine and lifestyle developed in Ancient India. He is sometimes referred to as the Father of Anatomy.

According to Charaka's translations health and disease are not predetermined and life may be prolonged by human effort and attention to lifestyle. As per Indian heritage and science of Ayurvedic system, prevention of all types of diseases have prominent place than treatment, including restructuring of life style to align with the course of nature and four seasons, which will guarantee complete wellness.

The following statements are attributed to Acharya Charka:

A physician who fails to enter the body of a patient with the lamp of knowledge and understanding can never treat diseases. He should first study all the factors, including environment, which influence a patient's disease, and then prescribe treatment. It is more important to prevent the occurrence of disease than to seek a cure.

Charaka was the first physician to present the concept of digestion, metabolism and immunity. According to his translations of the Vedas, a body functions because it contains three dosha or principles, namely movement (vata), transformation (pitta) and lubrication and stability (kapha). The doshas are also sometimes called humours, namely, bile, phlegm and wind. These dosha are produced when dhatus (blood, flesh and marrow) act upon the food eaten. For the same quantity of food eaten, one body, however, produces dosha in an amount different from another body. That is why one body is different from another. For instance, it is more weighty, stronger, more energetic.

Charaka knew the fundamentals of genetics. For instance, he knew the factors determining the sex of a child. A genetic defect in a child, like lameness or blindness, he said, was not due to any defect in the mother or the father, but in the ovum or sperm of the parents (an accepted fact today).

Rare Book Society of India, I have been looking for an English translation of Charaka Samhita. Please post if you have a link. Also, I question the 300 BCE date for Charaka in my talk on Antiquity of Indian Medical Systems (will post later today). Thanks.

charka's analysis is very scientific and everyone should accept it for his better life.