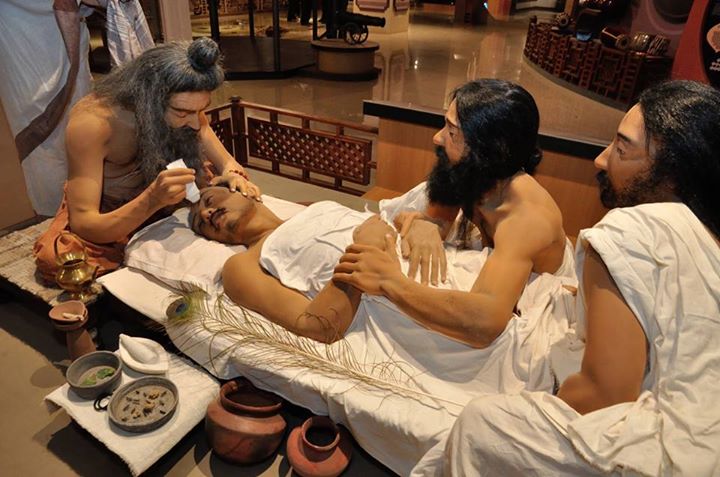 Digital Rare Book:
An English translation of THE SUSHRUTA SAMHITA
Based on original Sanskrit text.
Edited and published by Kaviraj Kunja Lal Bhishagratna.

Susruta is the author of the Susrutasamhita, the work known after his name, and one of the most brilliant gems in Indian medical literature, and thus he is recognised as the father of Indian surgery. There are references to accidental loss of leg of Vispala and she was immediately given an iron leg-prosthesis to walk with. The origin of the surgery can be traced back to the earliest times, probably back to the Indus Civilisation as some of the artefacts seem to suggest. The Rgveda mentions many a surgical feat of the celestial twin medical experts, the Asvins. Amongst the eight divisions of medical knowledge (Ayurveda), surgery was considered the first and the most important branch.

It seems that the ancient thoughts on medicine and surgery were confined to texts called Kalpas, small monographs. Early Indian medical literature was full of such monographs or handbooks. Agnivesa gave shape to such knowledge by gathering, pruning, enlarging and emphasising important aspects into text-books of medicine as early as 1200 B.C. The ancient Indian medical practitioners were divided into two classes: the Salya-cikitsakas (surgeons) and the Kaya-cikitsakas (physicians). Surgery had not yet been incorporated into the encyclopaedic tradition as represented by the Agnivesatantra. It was through the efforts of Susruta that surgery achieved a leading position in general medical training.

The Susrutasamhita is in two parts, the Purva-tantra in five sections and the Uttara-tantra. Those two parts together encompass, apart from Salya and Salakya, the other specialities also like medicine, pediatrics, geriatrics, diseases of the ear, nose, throat and eye, toxicology, aphrodisiacs and psychiatry. Thus the whole Samhita, devoted as it is to the science of surgery, does not fail to include the salient portions of other disciplines too. In fact, Susruta emphasises in his text that unless one possesses enough knowledge of relevant sister branches of learning, one cannot attain proficiency in one's own subject of study. The Samhita is thus an encyclopaedia of medical learning with special emphasis on Salya and Salakya. Sutra-sthana, Nidana-sthana, Sarira-sthana, Kalpa-sthana and Cikitsa-sthana are the five books of the Purvatantra containing one hundred and twenty chapters. Incidentally, the Agnivesatantra known better as the Caraksamhita and the Astangahrdaya of Vagbhata also contain one hundred and twenty chapters in all. The Nidana-sthana gives the student the knowledge of aetiology, signs and symptoms of important surgical diseases and those ailments, which have a bearing on surgery. The rudiments of embryology and anatomy of human body along with instructions for venesection (cutting of veins), the positioning of the patient for each vein, and protection of vital structures (marma) are dealt with in the Sarira-sthana. This also includes the essentials of obstetrics. Principles of management of surgical conditions including obstetrical emergencies are contained in the Cikitsa-sthana, which also includes a few chapters on geriatrics and aphrodisiacs. The Kalpa-sthana is mainly Visa-tantra, dealing with the nature of poisons and their management. Thus the Purva-tantra embraces four branches of Ayurveda. The Uttara-tantra, contains the remaining four specialities, namely, Salakya, Kaumarabhrtya, Kayacikitsa and Bhutavidya. The entire Uttara-tantra has been called Aupadravika since many of the complications of surgical procedures like fever, dysentery, cough, hiccough, krmi-roga, pandu, kamala, etc., are briefly described here. The Salakya-tantra portion of the Uttara-tantra contains various diseases of the eye, the ear, the nose and the head. Thus the whole Samhita is one comprehensive treatise on the entire medical discipline.

Source:
Susruta: The Great Surgeon of Yore by D.P. Agrawal

Plz give me volume 1 link