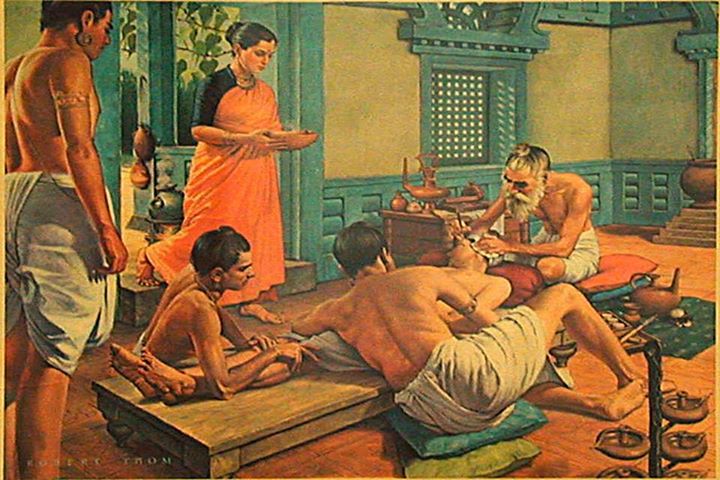 Perhaps the most prominent of all ancient Indian physicians, Sushruta is considered to be the father of Indian surgery as well as the first plastic surgeon in the world. Very little is known about the period when Sushruta lived. He is believed to be the son of the great sage Vishwamitra, and he studied medicine and surgery under Divodasa Dhanvantari, King of Kashi (Benaras), and founder of Ayurveda. The ancient Greeks knew about him, and called him 'Sucruta'. Ethical principles introduced to the West by Hippocrates, (Greek physician, father of Western medicine, (circa. 460 BC - 370 BC)) bear close resemblance to the principles promulgated initially by Sushruta, and later by Charaka. He emphasized the importance of balancing theoretical knowledge with practical experience in order to achieve good results.

The text attributed to him, though not available in its original form, is called 'Sushruta Tantra'. It was subsequently revised and expanded by Nagarjuna into the work we now know as Sushruta Samhita. It contains chapters on recognition and treatment of diseases, surgical instruments, surgical procedures, and the management of poisoning. Topics of specific interest include fistula-in-ano, hemorrhoids, intestinal obstruction, care of wounds, application of dressings, earlobe-piercing, cataract surgery, bladder catheterization, the use of leeches, as well as treatment of women and children. Sushruta was the first to suggest that malaria was caused by mosquito bites.

Sushruta is most famous for introducing rhinoplasty, a procedure performed commonly since mutilation of the nose was often the punishment accorded to criminals and prisoners. The procedure described by him is as follows, 'Now I shall deal with the process of affixing an artificial nose. First the leaf of a creeper, long and broad enough to fully cover the whole of the severed or clipped part should be gathered, and a patch of living flesh, equal in dimension to the preceding leaf, should be sliced off (from below upwards) from the region of the cheek and, after scarifying it with a knife, swiftly adhered to the severed nose.' [There follows a description of how to control bleeding, keep the nasal passages patent, and application of a suitable dressing. Alcohol and other plant-based sedatives were used to provide pain control, amnesia, and for controlling patient movement, as were able-bodied assistants. Sushruta was the first physician to advocate physiotherapy for patients recovering from surgery. The techniques described by him were used by British surgeons in India in the 18 th century and by Italian surgeons two centuries earlier.

Image:
Susruta, famed Hindu surgeon, is depicted in the home of a noble of ancient India, about to begin an otoplastic operation. The patient, drugged with wine, is steadied by friends and relatives as the great surgeon sets about fashioning an artificial ear lobe. He will use a section of flesh to be cut from the patient’s cheek; it will be attached to the stump of the mutilated organ, treated with homeostatic powders, and bandaged. Details of this procedure, and of Susruta’s surgical instruments, are to be found in the Susruta-samhita, ancient Indian text on surgery.
Source: CMC Vellore

Thank you very much

This picture used to appear in Parke-Davis ads, calendars etc. in the 60s. They had probably commissioned a number of paintings like this.

Our Heritage, Our Past, we hold it up always!!!

Sarah, thought of you.

A story of Incredible India....