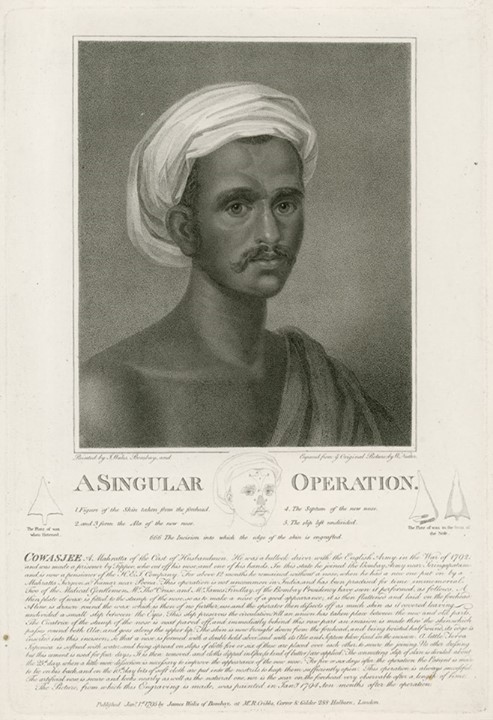 Featured in The Gentleman's Magazine and Historical Chronicle
For the year MDCCXCIV
Volume 64
By Sylvanus Urban
Printed by John Nichols, London - 1794

English doctors witnessed this operation in 1793 in India, where the British Army was fighting Tipu Sahib, Sultan of Mysore (c1750-1799). Cowasjee, who is pictured, was a bullock driver for the British Army. He was taken prisoner by the enemy and his nose and hands were cut off. A new nose was created through a skin-grafting process, using skin from his forehead and a wax template of the desired nose shape. The engraving was taken from a painting created ten months after the operation. The facial features appear natural. This method was far better than anything that had been developed in Europe and was adopted quickly, becoming known as the ‘Hindu method’. The cutting off of noses was often used as punishment in India and the caption reports that this type of operation was common.
(Page 891 - The Gentleman's Magazine).

The "Gentleman's magazine" section is a digest of selections from the weekly press; the "(Trader's) monthly intelligencer" section consists of news (foreign and domestic), vital statistics, a register of the month's new publications, and a calendar of forthcoming trade fairs.

Field of medicine was highly advanced in ancient as well as medieval India..sadly most of the traditional knowledge of our country is now found in museums somewhere anf memoirs of foreign travellers, etc

Cutting of nose was common during wars to put the enemy to shame. It was called in Kannada as "moogareyuvudu".

I think this is the real photo

The so called enemy was none other but Tipu Sultan...Please see the details @Dharampal.com

I'm interested in knowing more about this. Was anasthesia used?

For doing more research on contribution of Indian ancient science, follow the works of historian Dharampal. He spent twenty years of his life in visiting British archives and libraries in England to go through all documents, surveys, reports, letters, personal diaries etc., published during British rule, in which science and technologies in India in 17th and 18th centuries were discussed. Soft copy of the book, "Indian Science and Technology in Eighteenth Century" https://jambudveep.files.wordpress.com/2010/12/indian-science-and-technology-dharampal.pdf Introduction to Dharampal's Books https://www.youtube.com/watch?v=z6pN7Bo3nMc

When that time India was flourishing , rest of the world had no clue of anything leave alone medicine. Muslim and white man rule who were stupid to core ( middle Easter were little bit better ) destroyed the culture , there goes your everything. And Bharath fell.. and worst we never tried to peek into our past glory forgetting all differences. Indian Christians are brain washed by missionaries that whites' rule was better and many Indian Muslims adopt Wahhabi culture as if it's going to give them some identity. Fact is most of the Indian sub continent's culture ruled by Sanatana dharma, that is our true identity. See religious practice can be anything but culture .. defines who you are. Like Indonesia, Thailand and Singapore practice religion of your choose but maintain your culture.

Interesting ! How painful this kind of wanton punishment must have been.

But there is still need practical approach. True & bitterr