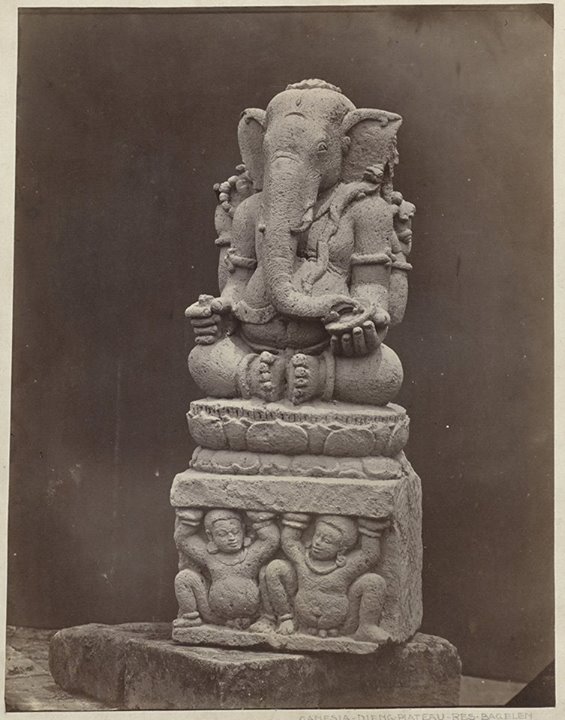 Hindus spread through Maritime Southeast Asia and took their culture with them, including Ganesha, statues of whom are found throughout the region, often beside Shiva sanctuaries. The forms of Ganesha found in Hindu art of Java, Bali, and Borneo show specific regional influences. The gradual emigration of Hindus to Indochina established Ganesha in modified forms in Burma, Cambodia, and Thailand. In Indochina Hinduism and Buddhism were practiced side-by-side, and mutual influences can be seen in Ganesha iconography of that region.

In Myanmar, the King of Brahmas called Arsi, lost a wager to the King of Devas, Śakra (Thagya Min), who decapitated Arsi as agreed but put the head of an elephant on the Brahma's body who then became Ganesha.

In Thailand, Ganesha is called Phra Phikanet (พระพิฆเนศ) or Phra Phikanesuan (พระพิฆเนศวร) and is worshipped as the deity of fortune and success, and the remover of obstacles. He is associated with arts, education and trade. Ganesha appears in the emblem of the Department of Fine Arts in Thailand. Large television channels and production companies have shrines in his honour in front of their premises. Few movies or television shows begin shooting without a Hindu ritual in which prayers and offerings are made to Ganesha. There are shrines to Ganesha across Thailand. One of the most revered shrines is the Royal Brahmin Temple in central Bangkok by the Giant Swing, where some of the oldest images can be found. Other old Ganesha images can be seen throughout Thailand, including a 10th-century bronze image found at Phang-Na with both Tamil and Thai inscriptions. The Hindu temple "Wat Phra Sri Umadevi" in Silom also houses a Ganesha image which was transported from India in the late 19th Century. Thai Buddhists frequently pay respect to Ganesha and other Hindu deities as a result of the overlapping Buddhist/Hindu cosmology. He is honoured with Motaka, sweets and fruit, when business is good, and he is made ridiculous by putting his picture or statue upside down, when business is down. As lord of business and diplomacy, he sits on a high pedestal outside Bangkok's CentralWorld (formerly World Trade Center), where people offer flowers, incense and a reverential sawasdee.

With regards to Indonesia, European scholars call him the 'Indonesian God of Wisdom'. Bandung boasts a Ganesha Street. A Ganesha statue from the 1st century AD was found on the summit of Mount Raksa in Panaitan Island, the Ujung Kulon National Park, West Java. While there are not temples dedicated specifically to Gaṇeśa, he is found in every Śiva shrine throughout the islands. An 11th-century AD Ganesha statue (seen in the picture below) was found in eastern Java, Kediri is placed in The Museum of Indian Art (Museum für Indische Kunst), Berlin-Dahlem. The 9th century statue of Ganesha resides in western cella (room) of Prambanan Hindu temple.

What has spread to se asia is monotheism n abrahamic religions, originally faith of this planet has always been sanatan dharma.

Regan Raj something similar in bronze ?

Ganesha, a god of wealth, would have been anachronistic in a temple devoted to giving up all wordly desires.

Sculptor's village ..Ubud Bali .. Hanuman and Ganesha .. Thought you would like

Tamilian culture spread all over d world. I am proud of Tamilan.