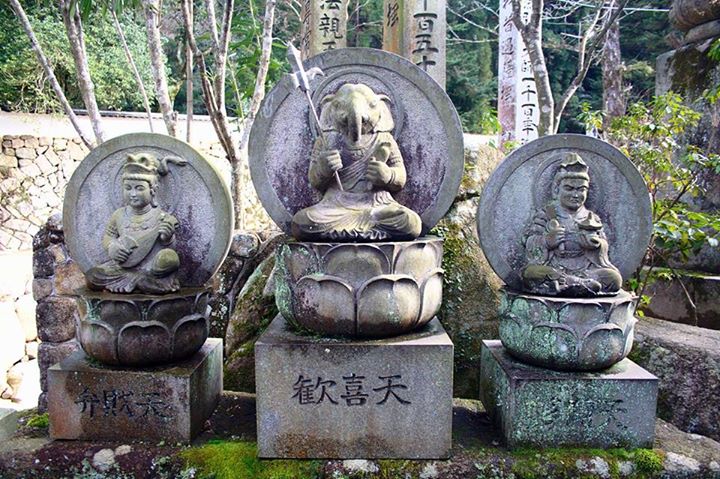 Ganesha worship was brought to Japan by early Buddhists through China. In Japan the Ganesha cult was first mentioned in AD 806. Scholars commonly date the presence of Ganesha in Japan with the age of Kukai (774- 834), the founder of the Shingon sect of Japanese Buddhism. The centrality of the worship of Ganesha or Vinayaka or Kangiten, as he is popularly called in Japan, is a distinguishing feature of this cult. The doctrines, rituals and beliefs of the sect have a number of parallels with the cult of Ganapatya.

Also called the Deva of bliss, Ganapati is invoked both for enlightenment and for worldly gains - more for the latter than the former. Kangiten - Vinayaka is offered "bliss - buns" (made from curds, honey and parched flour), radishes, wine, and fresh fruits. The offerings are later partaken in the same spirit as Hindus take prasad.

In the Hozan-ji temple on Mt. Ikoma in Nara, Sho-ten is worshipped mainly by the merchants.[2] In Osaka we have the biggest temple of Sho-ten named Kaishozan Shoenji Temple, where, besides devotees, a permanent priest offers prayers daily. A special temple is consecrated to the esoteric Twin Ganesa at the Jingoji monastery of Takao where every year worship is held in his honor.

Dr. Lokesh Chandra, Director,International Academy Of Indian Culture explains: "German scholar Philipp Franz von Siebold has written that in 1832 there were 131 shrines dedicated to the goddess (Benzaiten) and 100 to Lord Ganesha in Tokyo itself. A 12th-century temple of Ganesha in Asakusa suburb of Tokyo has been declared a national treasure of Japan."

Ganesha is worshipped as god of love by many young boys and girls for achieving success in their courtship. The old worship him for success in business.

Image:
From left to right, Benzaiten, Kangiten and Bishamonten in the Daishō-in temple in Japan.

Nice to see this spiritual link between India and Japan.

The Chinese and Japanese connection.

Does anyone see the anachronism of a god of wealth in a Buddhist temple?

Lovely write up and photo!

Very very informative and lucidly presented.I never knew all this.I am tempted to share this with my Facebook friends : I am not sure if they were aware of all this.

Quite interesting n informative. Worshipping Lord Ganesha has all d advantages for all kinds of devotees on this planet. D mention of Chinese devotees is conspicuous by its absence.

Thanks for the nice information that is done at foreign land

So Japanese are also Hindu?