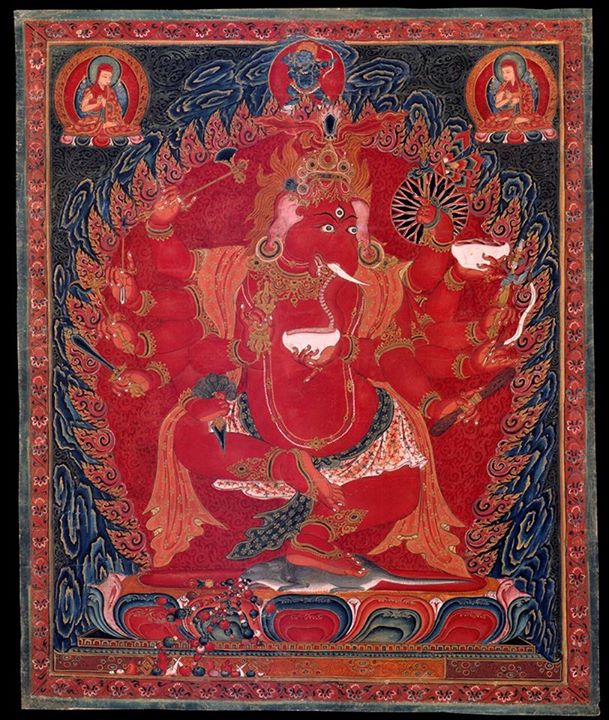 Tibetan representations of Ganesha show ambivalent views of him. In one Tibetan form he is shown being trodden under foot by Mah?kala, a popular Tibetan deity. Other depictions show him as the Destroyer of Obstacles, sometimes dancing.

Ganapati, Maha Rakta (Tibetan: tsog gi dag po, mar chen. English: The Great Red Lord of Hosts or Ganas) is a Tantric Buddhist form of Ganapati (Ganesha) related to the Chakrasamvara Cycle of Tantras. This form of Ganapati is regarded as an emanation of Avalokiteshvara.

"...beside a lapis lazuli rock mountain is a red lotus with eight petals, in the middle a blue rat expelling various jewels, [above] Shri Ganapati with a body red in colour, having an elephant face with sharp white tusks and possessing three eyes, black hair tied in a topknot with a wishing-gem and a red silk ribbon [all] in a bundle on the crown of the head. With twelve hands, the six right hold an axe, arrow, hook, vajra, sword and spear. The six left [hold] a pestle, bow, khatvanga, skullcup filled with blood, skullcup filled with human flesh and a shield together with a spear and banner. The peaceful right and left hands are signified by the vajra and skullcup filled with blood held to the heart. The remaining hands are displayed in a threatening manner. Wearing various silks as a lower garment and adorned with a variety of jewel ornaments, the left foot is extended in a dancing manner, standing in the middle of the bright rays of red flickering light." (Ngorchen Konchog Lhundrup, 1497–1557).

This form of Ganapati belongs to a set of three powerful deities known as the 'mar chen kor sum' or the Three Great Red Deities included in a larger set called 'The Thirteen Golden Dharmas' of Sakya. The other two deities are Kurukulle and Takkiraja.

In depictions of the six-armed protector Mahakala (Skt: Shad-bhuja Mahakala, Wylie: mGon po phyag drug pa), an elephant-headed figure usually addressed as Vinayaka is seen being trampled by the Dharma Protector, but he does not appear distressed. In Vajrayana and cognate Buddhist art, He is depicted as a subdued god trampled by Buddhist deities like Aparajita, Parnasabari and Vignataka.

The Tibetan Ganesha appears, besides bronzes, in the resplendent Thangka paintings alongside the Buddha. In "Ganesh, studies of an Asian God," edited by Robert L. BROWN, State University of New York Press, 1992, page 241-242, he wrote that in the Tibetan Ka'gyur tradition, it is said that the Buddha had taught the "Ganapati Hridaya Mantra" (or "Aryaganapatimantra") to disciple Ananda. The sutra in which the Buddha teaches this mantra can be found here

At the center of this work is the red, twelve-armed, dancing Ganapati standing on a jewel-spitting rat, a form of the elephant-headed deity known only in Buddhism. This painting is directly related to a meditation practice in which religious devotees visualize themselves as the “spirit subduing” deity Bhutadamara, shown here immediately above Ganapati, trampling a white elephant-headed deity. As Bhutadamara, they then imagine Ganapati standing in front of them, all in a mountain cave of blue vaidurya rock. This form of Ganapati belongs to a set of three powerful deities known as the “Three Great Red Ones” within the Sakya School of Tibetan Buddhism. Two Sakya lamas, presumably key figures in the transmission lineage of this practice, appear in the upper corners of the composition.

Warm reds dominate the palette and the contrasting cool blues of the stylized rocks framing the central deity and his flames lend vitality to this dynamic figure. Both the surface of the figure’s body nimbus and the dark area outside the rocks are filled with scroll patterns of Nepalese inspiration. Nepalese painting styles were used in areas bordering Nepal and within the Ngor branch of the Sakya School long after they had fallen out of popularity elsewhere.

Text and image credit:
The Rubin Museum of Art

I think the word should be changed , instead of Tibetan Buddhism, it should be Tibetan Hinduism. The religion in Tibetan has been misguided

Buddhism was very widespread in South East Asia - you can see the remnants of their monasteries and temples everywhere.

didn't find that sutra of Wiki